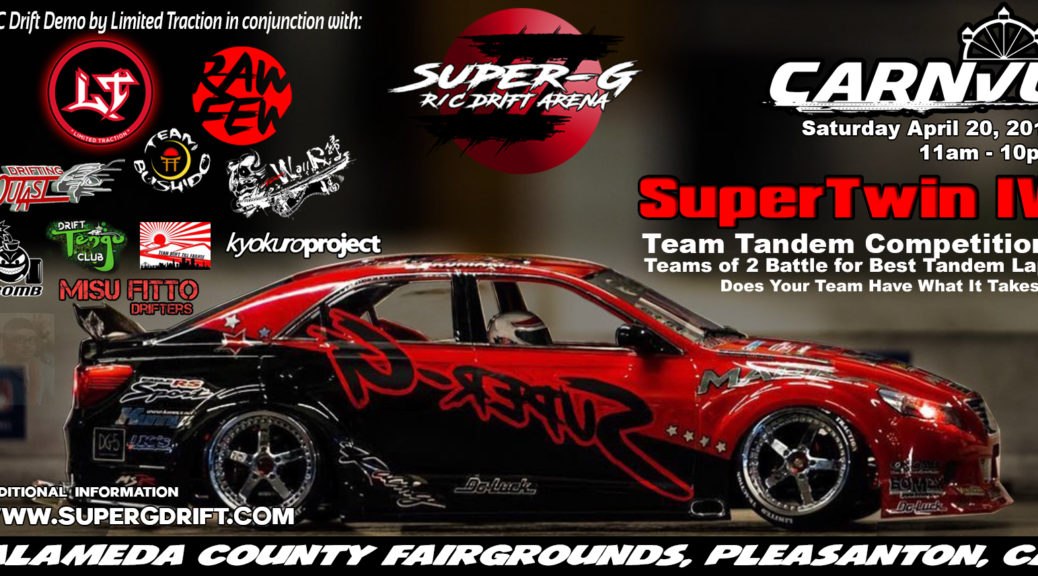 April 20, 2019 was the date for the CarNvl event at the Alameda County Fairgrounds in Pleasanton, Ca. The NorCal division of Super-G, Limited Traction was putting this together and in conjunction with the rest of the NorCal Drift Fam, there was no doubt this was going to be a serious event! Of course the RawFew wanted to be a part of this as well, so we rounded up the troops and planned a NorCal trip.

We didn’t realize til deep into the planning that this event was to be held on Easter weekend. This changed things up a bit since we had planned to hang out most of Sunday as well. It ended up having to be a quick turn-around for us, but we definitely did not want to miss this.

The earliest we could get out of LA was 9am. After a quick flight and grabbing the rental car, it put us right at about 11:30am. We were all starving so we stopped for a quick bite at the Smoking Pig for some Barbecued eats, then it was off to CarNvl!

We were proud to be traveling with the latest addition to the RawFew, Manny Campalans! None of us are quite sure how, but the stewardess caught wind of him being the new guy, and she announced over the PA system and welcomed him to the team. Very cool!

We all felt a little guilty when we arrived since it was already underway and you could see the amount of work and effort that went into this sick setup. Limited Traction, along with Team Bushido, Outlast Drifting, Wall Ride, T-Bomb, Tengu Drift Club, Team D.T.F., Kyokuro Project, and Misu Fitto Drifters had put together a huge layout with some impressive props! The center piece for myself was the sick Tire Bridge that Dennis had been working on for weeks leading up to this event. It is truly an impressive addition to his already mind blowing lineup.

The session was sick with so many good drivers putting down some good laps. The track was huge, so there was no issue finding an open spot, or finding a few people to tandem with if that was what you were after. There were also a few people practicing for the SuperTwin IV that would be taking place later in the event.

It was great to see Jonah Espino there doing what he does best, gathering footage for some of the finest videos around. If you aren’t familiar with his work, you should be. Make sure to check his channel out here: ninjonaah

The event itself was awesome! There was a section of carnival rides for the younger crowd, a huge car show, and a section for stunt bike demos and full scale drifting! A few of us got caught up watching the drifting since they were allowing them to tandem and even going 4-5 cars at a time! It was really some fun to watch. If you didn’t make it out to CarNvl this year, make sure to shoot for the next one. It really is a great event.

Back at the R/C Drift track, it was time for the SuperTwin IV Team Tandem Battles. I was lucky enough to be chosen as one of the judges, along side of Julian and Marcos. We knew the competition was going to be tough since it was basically a building full of top skills. In the end, it came down to Team Wall Ride/Outlast Drifting (Allen and Scott) and The RawFew (Nick and Manny). Allen and Scott had taken the win in SuperTwin III, so everyone was aware of what was to come!

The order was decided on a coin toss since Julian brought up the fact that there is different pressure depending on the order. Scott called it since they were undefeated in this competition and RawFew were up first. Nick and Manny put down a pretty good run with good proximity and angle. It was easy to see these guys were in sync with each others driving. Now the stage was set and Allen and Scott knew what they needed to do. I don’t know how else to say this, but that was one of the best Team Tandem runs we have witnessed thus far in the SuperTwin battles. Proximity was literally about 1″ gap between them for the majority of the run, both cars being parallel with no noticeable variance in distance. Transitions were in sync and tight. Scott had closed the door on Allen at one point, but Allen backed off and maintained the same angle as Scott. This in my opinion took a negative and turned it into a positive. Overall, a well deserved victory for Team Wallride/ Outlast Drifting, as well as setting the bar for the next SuperTwin!

This was a long event, 11am – 10pm. After flying up and hustling to get to the event, the team was ready to tap out around 7-8pm. I personally could not stay awake, so we made the decision to call it a day. As much as we wanted to stay, it was just impossible. It was really a great event! As expected, The R/C Drift Track was drawing the largest crowds all day long!

Joe and I, along with the rest of The RawFew who made the trip to CarNvl, Mark Santa Cruz, Nick Lepisto, and Manny Campalans would like to give a huge thank you to our NorCal Family – Team Bushido, Team Wallride, Outlast Drifting, Tengu Drift Club, T-Bomb, Kyokuro Project, Team D.T.F. and Misu Fitto Drifters for all the support and hospitality! We are so grateful we are able to slide together more than we ever have in the past! We would also like to give special thanks to our NorCal division, Limited Traction for setting this up and taking care of a lot of the behind the scenes work it took to get the team up there for this event! Dennis, without your help and dedication, this event would not have been what it was, and it would have taken a lot more work for us to make it up there! I know I speak for the entire RawFew Team when I say we can’t wait for the next one!!!