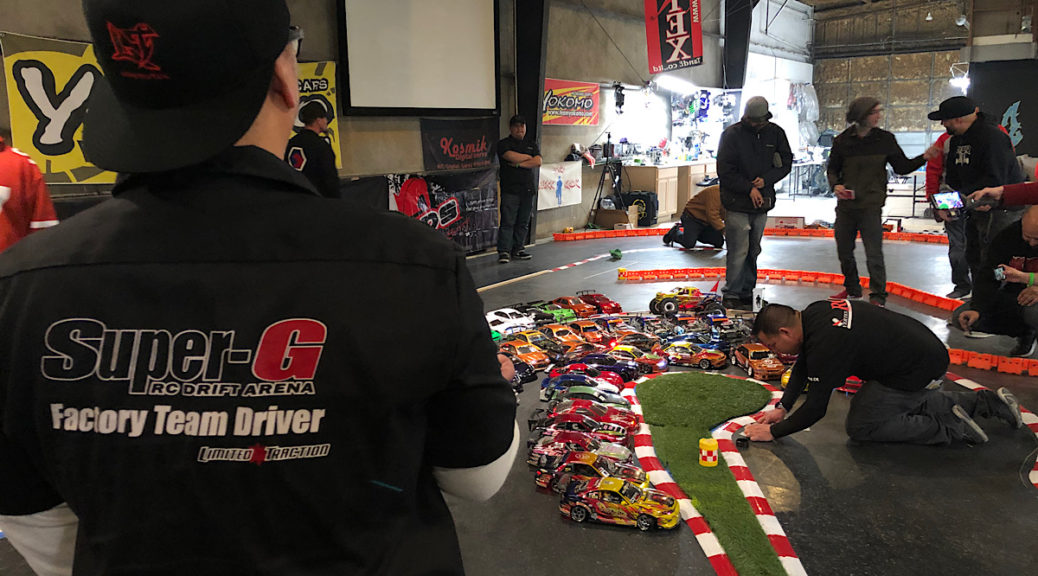 February 18, 2020 was Another Level Racing’s 1st Annual Drift Comp in Merced, Ca. The owner Jay has recently opened doors at his new facility and we were impressed. He has an onsite hobby shop, plenty of pit space, and a huge P-Tile track. In my opinion, probably at the limit of how big you would want to go. Any bigger and you would need an elevated drivers stand to see what you are doing.

The Weekend
The mood at Super-G in the weeks leading up to the comp was a bit complicated since things are extremely hectic with The Super Drift Championship qualifying rounds getting ready to kick off, but we all wanted to go and support Jay. At the last minute rooms got booked and rides were arranged. We knew our NorCal Super-G Fam (Limited Traction and Team Bushido) were already going, so that was an even stronger draw. So we rounded up the guys RawFew – Jason, Mark, Manny, Joe, and myself, and Team Zenshin – Mike, Sam, Aydin, Alan, and Daniel, and headed out Friday night.

We all met up on the way up and proceeded to our hotels. In the morning Joe, Mark, Manny, and myself met up at Marie’s Mexican Kitchen in downtown Merced.. It wasn’t bad. In fact it was better than I expected. It looks like their claim to fame is their enchiladas, but none of us tried them.

We were all coming into the comp a bit tired since we had just received a nice package from the Super-G Team Sponsor, Futaba USA! I didn’t get to sleep til after 5am since I had to get my new 7PXR ready for battle! I have to say I didn’t think it could get better than the 7PX, but the R proved me wrong. It has a slightly better feel all around. Lighter weight, newly designed drop down, offset trigger, and for some reason a smoother overall feel. I was blown away!

Another Level Racing
We finally got to Another Level Racing and everything was already in full swing. It was a full house! We walked in and it was like we were at home. All familiar faces, live DJ, and everyone just having a good time doing what we all do.

We immediately signed up for the comp and grabbed a pit space. It was a different feel for Joe and I, since we are usually the ones stressing over the event. We got to sit back and enjoy the hobby that we both love. Honestly we missed being in the mix. It’s been a good while.

Food and More Food
Jay had arranged for some food. There was some burgers and empanadas. It was really good food! About an hour later they announced lunch. I thought we had just had lunch, but it turns out it was a snack! Ha ha! Talk about taking care of his customers! I should have grabbed some pics of the food, but I got caught up in the moment and was just enjoying the event.

Unfortunately Joe and myself needed to cut out as soon as the comp was over, since he was flying out at 5am the following morning. We needed to get back to LA and get things ready for the week before he took off. We didn’t get to stick around for the raffle or the announcement for Best of Show, but I’ll add that later.

We had a great time at Another Level Racing! It was all about chillin with the homies from ALR and our NorCal Fam – Limited Traction and Team Bushido!!! Huge thanks to Jay for a great event! Thank you for the hospitality and all the hard work you put into this!

We had heard Another Level Racing was open for late sessions. We got here at 1:00am, but looks like we missed everyone. We figured everyone would be resting up for the next day’s event, but we gave it shot since it was a couple minutes from the hotel. GOOD TIMES!