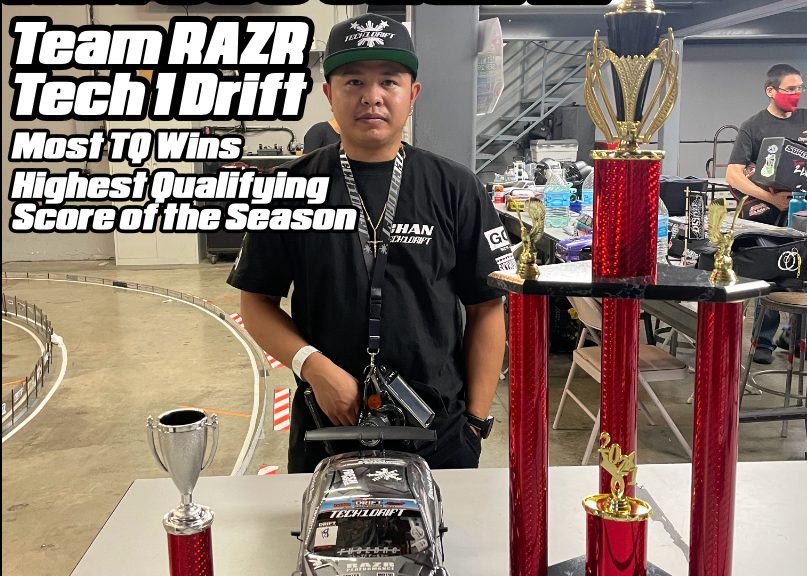 If you have been a part of R/C Drift in the United States, you no doubt have heard of Alfredo Chan III and his team, Tech 1 Drift. He has been a part of the scene since the early days, back when Sprint 2s were all the rage. Maybe even before that when we were putting electrical tape on the tires. Since then, Alfredo has been traveling and winning comps just about everywhere he goes. The Super Drift Championship Series has been no exception. Alfredo is always up in the mix with his awesome R/C skills and ability to adapt to any situation. This season he really stepped it up and made a conscious decision to win. He obviously wasn’t joking and when he put his mind to it, he made it happen. In fact, he has been traveling between Super-G and Slidelines in Las Vegas and has been putting it down in both regions. Since SoCal was his first comp in the Super Drift Championship 2021 Series, this is where his points will stay, but it will be interesting to see if he can take double titles. This would be a first! He has already established he can take home the most Top Qualifier Titles, as well as accumulate the most points to take the title of 2021 SoCal Drift King! He has really left his mark on the scene for 2021 already! Congratulations to Alfredo on some huge accomplishments thus far!
Can he pull it off against the best the U.S. has to offer? We’ll answer this next month!!!

Super-G hosted the SoCal Regionals
The SoCal Regionals did not disappoint this year. Even with a rocky start with COVID and all, the turnouts were great! We watched many new comers greatly improve with each round! It was a very exciting season for R/C Drift in SoCal.

The time is finally here. The regionals are wrapping up and the Super Drift Championship 2021 U.S.A. Finals are upon us! Since we announced the dates back in January of this year, we have been in contact with many who plan to come to Los Angeles to throw down with the best the U.S. has to offer. It’s all coming together and it appears everything is a go. This promises to be the event of 2021 for R/C Drift! The sponsors are really taking notice of the Drift Community, so make sure you don’t miss it!