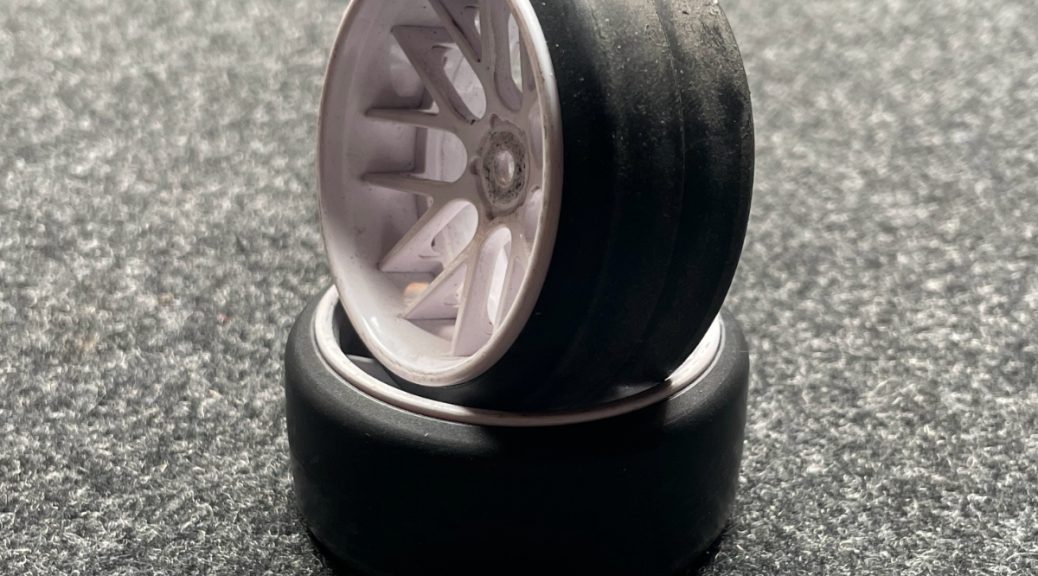 Here at Super-G I am constantly testing tires. We are always on the hunt for the next Spec tire, so I was really exited when a set of the new ReveD tires landed on my pit table.

The first thing I noticed was the unique matte finish when compared to just about every other tire I have used. I was curious as to if this would have any effect on the tire when new. No break-in, quicker break-in, longer break-in, no difference? They looked cool and seemed to be a little lower profile than what I am used to. The ReveD outer diameter measures 60.50mm, when compared to the DS Racing Comp III LF-5 that comes in at 62.50mm so they are indeed smaller.

The fit was spot on as expected from ReveD. Easy to install, but snug enough to stay on. I had one tire start to come off during our testing, but with any tire, wheel size and foam thickness and condition also play a factor. I attribute this to user error, not the tire’s fault. The shape is true and consistent as well.

The way I always test tires is to compare to our spec tire at the time (DS Racing – Comp III LF-5) here at Super-G. This makes it easy to spot any and all differences in a tire’s characteristics. I installed the ReveD tires on my personal car and set out to session with Team Super-G Driver, Nick Lepisto. Our tunes are extremely close and I could count on him to put down some consistent laps, so this would provide an excellent baseline. Our surface is Polished Concrete.

Without as much as a single lap on the new tires, I started running laps with Nick. His tires had already been broken in and so his speed and handling would be as consistent as possible. Immediately I was almost identical in speed. The forward traction was definitely something I was familiar with. I felt comfortable pushing it with one lap in. Sideways traction was also very similar to our spec tire as well. A very nice balance.

At about the 10 minute mark the ReveD tires began to increase in traction. I began to inch away from Nick on the straights and in the sweepers. I was also able to drive more aggressively on initiations and in the tighter transitions. They had a nice forward to sideways traction balance.

At around 20-25 minutes into the break-in period the tires really came on line and seemed to reach their true traction potential. I found I was able to pull away from Nick at will. Putting the power down in the sweepers allowed me to increase the gap or slam the gap closed if I was on the chase. On the straight I could easily gap Nick if I was leading, or push him the entire straight if I was chasing. The balance remained good, and the handling was excellent.

Looking back on our previous tire testing, I would say the new ReveD tires are very similar to the Comp III LF-3 tires both in speed and handling.

I have made an error while testing the new ReveD tires. I am posting my findings despite my mistake since I think this still gives a good indicator of where these tires fall when compared to other known tires.

I normally use Topline High-Traction wheels. For this test I mistakenly mounted the ReveD tires on Topline Standard wheels. That being said, the ReveD tires would be a little faster and have some added sideways traction at every point in this test if tested on High-Traction wheels. This would only increase the difference in the comparison for those concerned with the speed of the tires.

The new ReveD tires are definitely a high quality tire. The shape and consistency is some of the best I have seen in a R/C drift tire. The smaller diameter provides more fender clearance, but also reduces your ground clearance. I did not notice any type of difference with the matte finish other than it looked cool and different. Break-in was about as standard as it gets, with the times being very close to the other tires available today. With the contact surface being very flat, and the corners being sharp, this tire will find a lot of speed right out of the gate. The forward speed to sideways traction is good and comparable to the other tires in that traction range. I suspect they will find themselves being slightly slower than the Yokomo DRC, but don’t quote me on that. That test is for another time.

SEE YOU ON THE TRACK!

NEW HOURS/DAYS! (CLICK ABOUT US) - ALL ORDERS ARE PROCESSED IN 1-3 DAYS. Dismiss