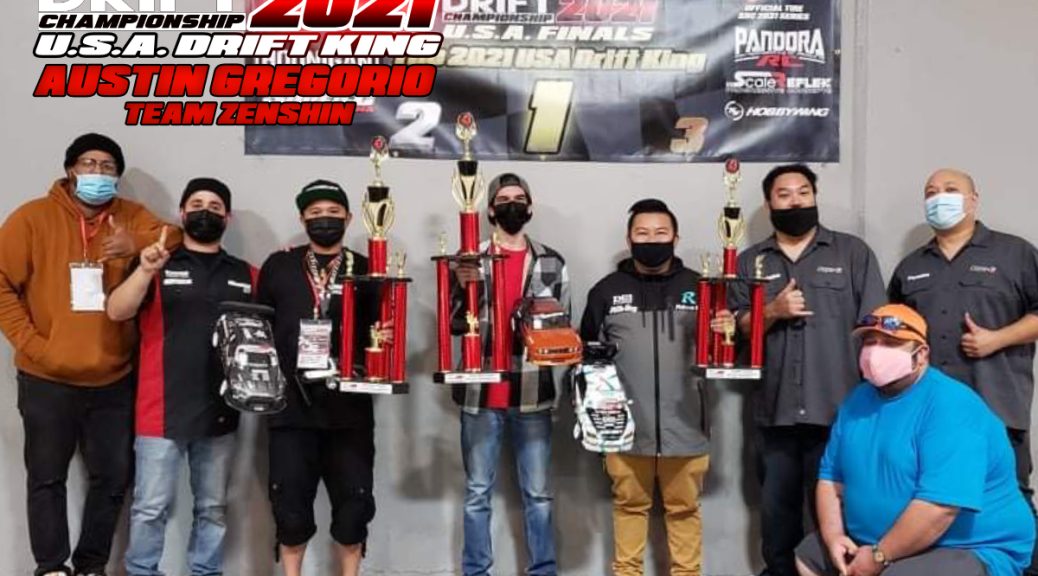 On October 24, 2021 here at Super-G R/C Drift Arena in sunny Southern California, we hosted the Super Drift Championship 2021 USA Finals. The very best in the USA brought their A-Game to throw down and compete for the title of USA Drift King. There were a lot of heavy hitters and some really amazing driving, but of course there can only be one champion with the Title of USA R/C Drift King, and his name is Austin Gregorio of Team Zenshin.

This is one of those moments where there is so much to say, but also so little. As many of you know, there were definitely some favorites coming into the Finals for the 2021 Season, and we have all watched the battles both in competition and in points all season. Austin’s is a story that embodies the spirt of the Super Drift Competition Series. Not only can you qualify to compete at the Finals by winning regional competitions, but also though participation points. Coming into the Finals through any channel gives everyone an equal shot at the title. What this proves is, you don’t need to be a big name in the community to win all the marbles. You just need to simply join your regional competition, hone your skills, and bring it when it counts. (October)

Austin joined the R/C Drift Community last year and has been steadily growing his knowledge and skills throughout the 2021 Season. He took a crash course in R/C Drift when he landed a job here at Super-G. He had no choice but to learn about all the different products we sell, as well as all the ins and outs of tuning. Contrary to popular belief, nobody working at Super-G has any time to drive outside of the normal track hours (maybe sometimes, but not often), but being surrounded by R/C Drift all day everyday is going to rub off. Austin has taken advantage of being exposed to almost all the makes and brands available to the community today, and had made his choices very carefully.

Austin’s performance throughout the 2021 Season was really low-key and with the first 6 rounds consisting of 4 – 17th place and 2 – 9th place finishes, he definitely was not on anyone’s radar. However, he did wrap up the season with a 4th Place finish in Round 7, and a 5th Place finish in Round 8. Not too shabby, but even more so, was the huge improvement in Austin’s performance coming into the Finals. Breaking into the top 4 here in SoCal is no easy feat. He seemed to have found a setup that was working well for him – his Usukani PDS Mix, Acuvance ESC, Acuvance Fledge Motor, and Futaba 7PXR, Futaba GYD550 Gyro, and Futaba CT700 Servo. Of course his personal tune plays a huge role, which he does himself.

Although many may have been blindsided by Austin’s win and him earning the title of The Super Drift Championship 2021 USA Drift King, I must admit from all my observation throughout the 2021 season, it was clear Austin had it in him to be able to be competitive at this level. There was no doubt all the competitions throughout the season had prepared him for the pressures of the Finals and facing the very best the US has to offer in R/C Drift.

Going into next season, Austin has stated he is ready to defend his title, but has also expressed great interest in diving into Non-Assisted (No Gyro) Drifting as well. There is no doubt with his tuning knowledge and know-how, he will be a force to be reckoned with in both.

Here is a look at Austin’s winning, “Close to stock” Usukani PDS Mix. Of all the various chassis we have available here at Super-G (which is pretty much all of them), Austin gravitated to the Usukani Mix. Not only is this one of the most overlooked chassis around, but bang for the buck it’s almost impossible to beat. Austin has found the PDS Mix to be pretty well setup out of the box. He has changed dampers to Yokomo Big Bores, and has opted for a Tamiya Gear Differential with upgraded drive cups. Other than that he has kept his chassis stock. For his electronics Austin has chosen, Acuvance Xarvis XX ESC, Acuvance Fledge Motor, Acuvance Blaze Capacitor, Futaba CT700 Servo, Futaba GYD550 Gyro, and to keep it all under control, a Futaba 7PXR Radio System. This is without a doubt a winning setup.

Holding the title of Super Drift Championship 2021 USA Drift King, and being ranked the top driver in the US, you would expect a long history of R/C Drift accomplishments. For Austin, this is just the beginning. What a way to break into the ranks of the best! Congratulations to Austin Gregorio and his team, Team Zenshin! The reigning Super Drift Championship 2021 USA Drift King!!!

We are shipping BLACKFRI/CYBERMON Orders out asap. Please understand we are trying our best. Dismiss