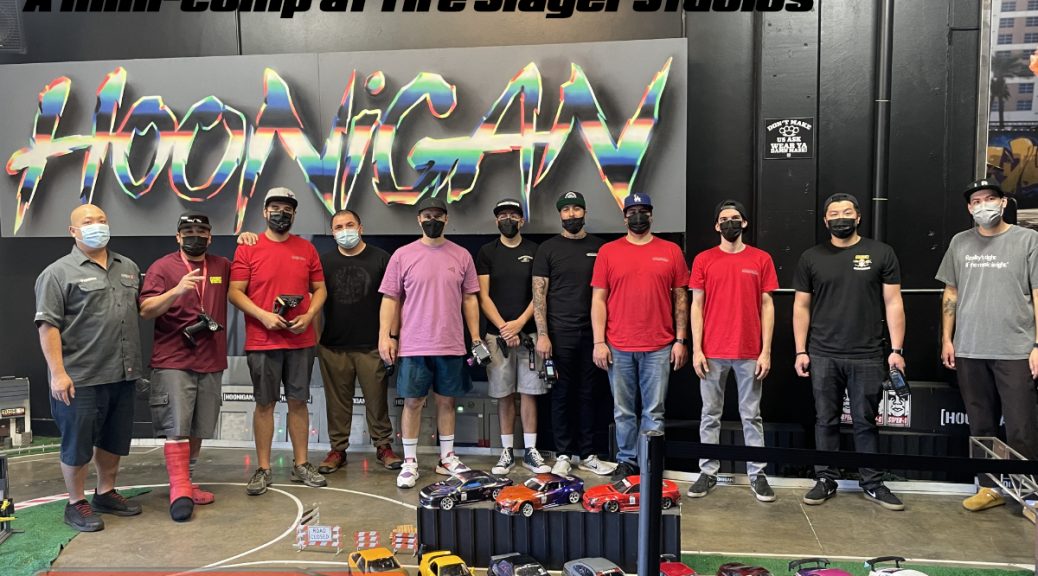 Every month at Hoonigan’s Tire Slayer Studios in Compton, California, Hoonigan hosts a Club Day. This month was Volkswagen / Audi themed. Although we were working on short notice, Super-G along with Hoonigan decided to host a R/C Drift Mini-Comp – Battles at the Bodega!

With COVID restrictions still in play, the number of competitors needed to be capped. We have done comps with less, so we knew it was going to be a blast regardless. The Club Day itself was packed with a bunch of Euro builds with the usual USDM and JDM hotness sprinkled in the surrounding parking areas.

The competition was a ton of fun! We made the best of the current layout and it was more than enough to get some good battles going. We forgot our ScaleReflex Starter Gate, but that was ok since this comp was going old school style – Ready, Set, Go! Along with old school style judging. Who had the best lead and chase, no replays, no super technical judging, just a lot of fun!

The format was King of Bodega. 3 Wins advanced the competitor to the top 4 to battle it out for the win. Austin Gregorio (the USA Drift King / Team Zenshin), Mitch Phillips (Team Zenshin), Sean Morgan (Nemurenai), and Jaycen Wong (Goonie Grom Squad).

Jaycen was able to fight his way thought the group and ended up the First Winner of the Battles at the Bodega! Hoonigan gave him his choice or any shirt or hat for taking home the win!

Overall, considering the limitations and the short notice, it was a seriously fun event! A few of the Super-G regulars came out, as well as the Goonie Grom Squad all the way from Vegas. Everyone who participated asked if this was going to happen again cause they had a blast. We can’t wait to do it again!

We are shipping BLACKFRI/CYBERMON Orders out asap. Please understand we are trying our best. Dismiss