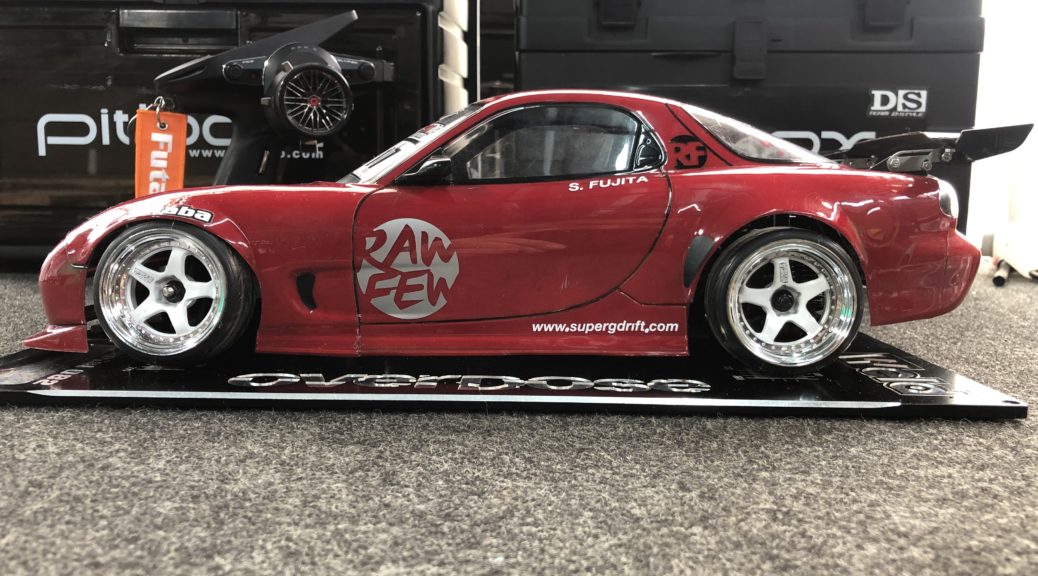 As many of you already know, I’ve been running my Futaba 7PXR along with my Futaba CT700 Servo and Futaba GYD450 Gyro. The CT700 and GYD450 have been my setup for a good while now and it’s rock solid. I recently added the 7PXR to the list, but functionality wise, nothing has changed from my previous remote, the 7PXLE.

This weekend we headed out to Slidelines R/C in Las Vegas for the kick off of their regional Super Drift Championship Series and also their One Year Anniversary. It was a last minute call as to if we were going to fly or drive, and we ultimately decided we would fly. We were returning in less than 24 hours, so this meant we were traveling light. I gathered up my 7PXR and the chassis I was entering the competition with, Yokomo YD2 EX2, along with my batteries, charger, and a small collection of tools needed to make fine adjustments, swap wheels, etc. The idea was no check-in luggage this time around, just in and out quick. Computers and iPads were left at home.

Once we finally settled in at Slidelines, I had a chance to get on the track and see what we were looking at for the comp. This was a different surface than what we run on at Super-G R/C Drift Arena. We are used to and tuned for Polished Concrete. The comp at Slidelines R/C in Las Vegas was on P-Tile. This translates into a higher traction surface that has a slight “give” to it.

Immediately I realized a couple things:
I needed to reduce my Gyro Gain, which is a normally accessed adjustment used daily. This was due to the high level of traction and I needed to increase my transition speed.

The second thing that was apparent was I had a lot of front wheel shake when exiting a few high-speed corners. Even with the gyro setting lower, the shake was still present. Back home I was running a damper setting of 95 on the CT700 Servo. This was the minimum needed to eliminate the shake.

Luckily I was able to make adjustments to the Servo Settings on the CT700 via the 7PXR since we traveled light this time. Normally without access to a computer, I would be forced to deal with a shaky servo. This time was different! I accessed my Servo Settings via the S.Bus Servo option on the 7PXR and began fine tuning the Damper Setting. I ended up finding a value of 120 on the Damper to be the sweet spot for the CT700 on this track!

I have no doubt being able to adjust my servo settings with only my chassis and remote played a huge part in being able to land a solid 3rd spot on the podium at this weekend’s comp. 3rd out of a field of 24 wasn’t too bad considering it’s been a couple years since my last competition.