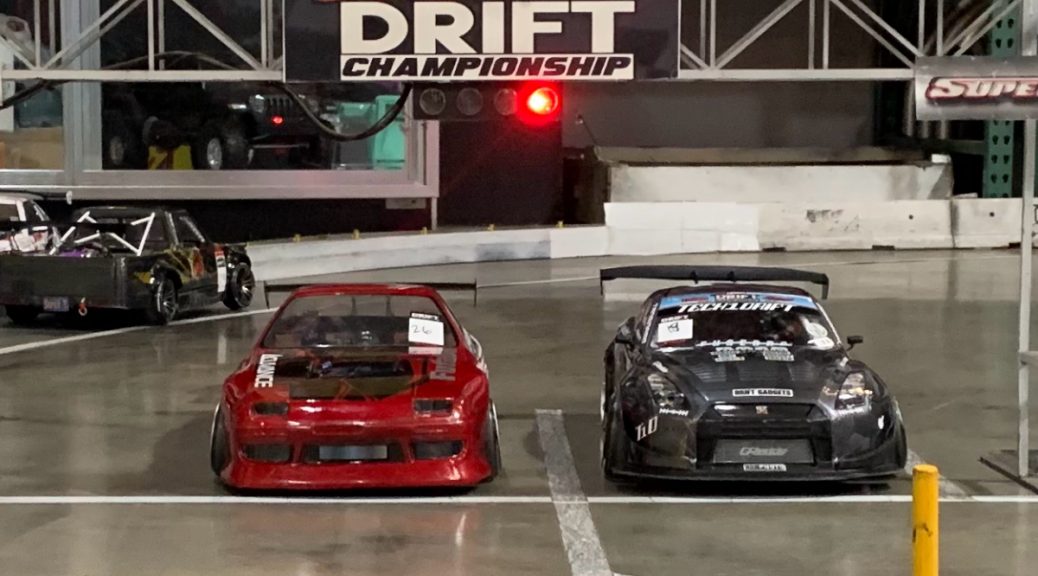 This weekend was the Super Drift Championship 2021 Round 8 for the SoCal Region. This was the finals for SoCal and also the Double Points Round.

This round started off interesting to say the least. The weekend was hot so we made sure we had everything setup before the heat set in. As we hit 5:30pm and were ready to get things underway, we were struck with some technical difficulties. Our broadcast system was over-heating and so things didn’t want to get going as normal. We started 30 minutes late and there was a lot going on at that time. Our normal person who we have come to rely on for the Driver’s Meeting was not present, and I was pulled in all directions trying to get things going. Needless to say, I was not in the correct mindset to do the meeting and I must apologize to everyone in attendance. I had a lot to say being the last round, but I was so preoccupied I really fell short and forgot a lot of what I wanted to say. Again guys, I apologize.

As we kicked off the day it was clear everyone present was ready to really throw down. Double points meant this could really make or break the season for a few people. I had decided to use the track layout I had planned for The Finals in October to really put everyone to the test. It is a good combination of high-speed, low-speed, technical, and timing critical driving. It was no surprise the drivers were more than up to the task.

The Judges
The Judges for the event were no strangers to the Super-G competitions. Shaine Colins (Team D-Style), Ted Britt (Team Bubblemilk), along with myself Steve Fujita would be overseeing the competition and enforcing the rules. We owe a huge thank you to Shaine and Ted for taking on the such a intense role in the comp. It wouldn’t be possible without them.

Qualifying
The Qualifying was as serious as it gets. There was no mistake, everyone was here to show their stuff. Even though there was a lot of great qualifying runs, there was one that stood above the rest. Jason Fordyce (Team Super-G / Futaba U.S.A. / Acuvance) had a mishap on his first run, tapping the wall on his entry to the first sweeper earning him a zero for that run. I think everyone expected him to go conservative on his second (last attempt), but instead, in Jason style, he sent it! His confidence paid off and netted him Top Qualifier position, and the winner of the Hoonigan TQ of the day award! Jason has earned the reputation of one of the most dynamic drivers in the scene, and he did not disappoint! Congratulations to Jason for a job well done!

Tsuiso (Battles)
EXPERT
Next up was the what we had been waiting for all season! Next to the U.S.A. Finals, the SoCal Regional Finals is the biggest event for SoCal. It all came down to Kris Steel (Team Outbreak) vs. Jason Fordyce (Team Super-G / Futaba U.S.A. / Acuvance) for 3rd and 4th, and Alfredo Chan III (Team RAZR / Tech 1 Drift) vs. Aydin Angulo (Team Super-G / Futaba U.S.A. / Acuvance) for 1st and 2nd. It was no surprise to see these guys all up in the mix for Top 4.

First up, Kris vs. Jason for 3rd and 4th. Both of these guys have been in it for a minute and have battled many times in the past. Everyone knew it was anyone’s to win. First out of the gate was Jason in the Lead and Kris on the Chase. Both these guys were on fire today and Jason put down an awesome lead run! Kris answered back was a really great chase! There was really nothing to knock about either of these runs. Then the switched and Kris was on the Lead and Jason on the Chase! Kris put down a great lead as well and Jason answered right back with a great chase! Overall, Jason was able to put together a better lead and chase and landed himself in the 3rd Place Podium spot! Kris locked down a very respectable 4th place!

Then it was the battle of battles, Alfredo vs. Aydin for 1st and 2nd! Both of these guys have been on the podium all season and everyone expected both of these guys to throw down. First up was Alfredo on the Lead and Aydin on the Chase! This run was NUTS! Both these guys have a ton of speed AND a ton of angle! Alfredo put down a blistering lead run with Aydin hot on his door! It was obvious this battle is what the entire season had been all boiling down to! Both of these drivers were right at home on the podium and both have had their share of TQ titles! Next was Aydin’s lead and Alfredo’s chase! They started by wishing each other good luck with a fist bump, knowing very well they were both very capable of taking home the win. The run was incredible to say the least! Aydin put down an equally impressive lead, and Alfredo was able to maintain even better proximity and positioning the entire run! HOWEVER, Alfredo had contacted the wall at the entry to Zone 1, and this landed Aydin on the Top Podium Position of 1st Place, and giving Alfredo a very hard fought 2nd!

To say these runs were an amazing way to end the SoCal Regionals would be an understatement! The podium was no surprise to anybody and all who were present were witness to some of the finest driving we have seen so far!

Sportsman
This round we had quite a few first time competitors which is always awesome! There’s only one way to get going in the comps, and that’s to just jump in and do the do. For Sportsman, we had Rykin Settle vs. Phil Sandoval for 3rd and 4th spot, and Cody Johnson vs. Michael Mendoza for 1st and 2nd. After some good runs, Michael grabbed 1st, Cody 2nd, and Rykin took home 3rd! Great job guys! Looking forward to seeing more of you in the future!

What an awesome way to wrap up the SoCal Regionals! The level of driving and camaraderie amongst everyone in the community was something to witness all season!