Yokomo’s YD-2 series features a YD-2 E series equipped with a standard low-mount motorized 4-gear transmission on a double deck chassis, and a YD-2 S high-mount motorized aimed at a lower grip road surface Together with the series, we have launched 3 grade machines for each series, and now a total of six models have been released. Of course, although it is a lineup that meets the needs of each user, the driving style and road surface condition, here we compare the 2 series thoroughly! 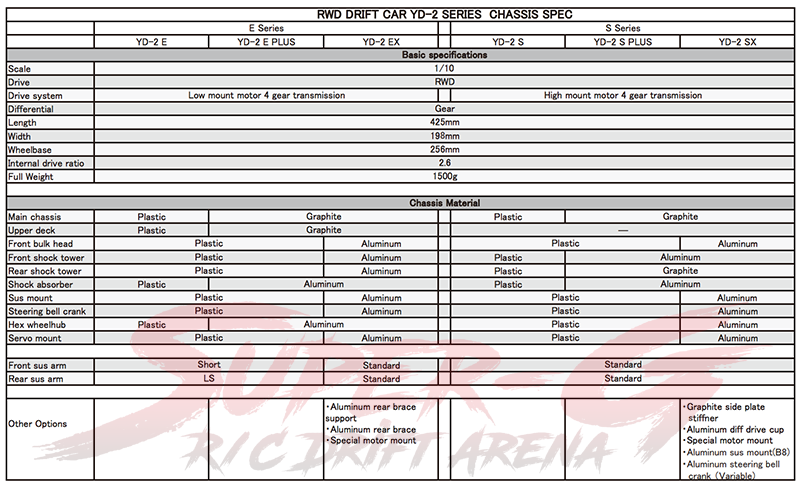 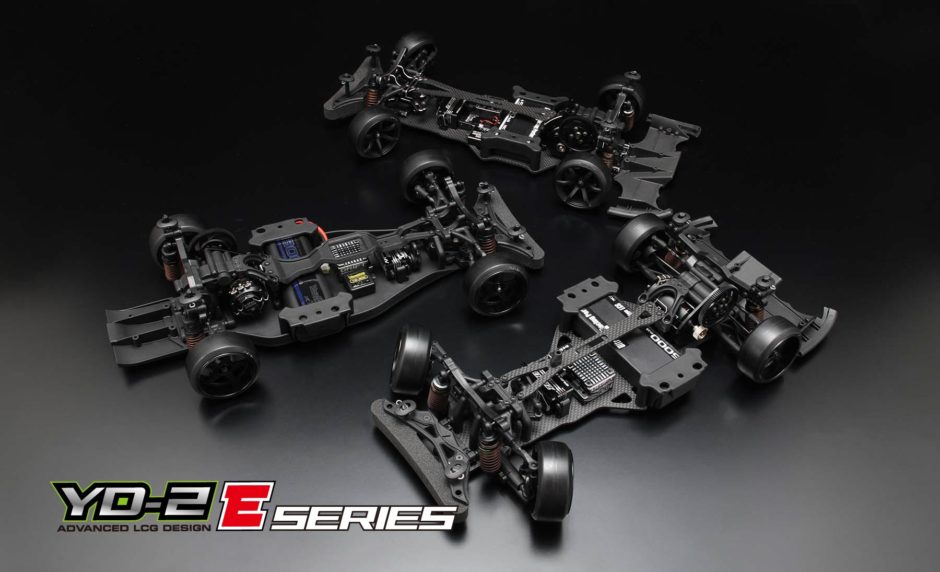 Originally it is a lineup of two models of the original YD – 2 and YD – 2 PLUS. By installing a 4 – gear transmission referring to a 2 WD off – road car in a general double deck chassis with a touring car etc., it increases the rear traction While preventing the collapse of the left-right balance, I got the title of the strongest RWD drift car with overwhelming performance. YD-2 EX with a number of optional parts mounted in a newly designed narrow graphite chassis appeared, but he recorded a good result in competitions all over the world and quickly raised its name as the top competition machine of RWD drift It was. And recently, the conventional YD – 2 and YD – 2 PLUS also renewed based on EX ‘s chassis composition and running data, reviewed the alignment of the front tread and rear suspension, adapt to the latest drift scene, E series of YD – 2 E, YD – 2 E PLUS, YD – 2 EX was completed with the symbolic letter “E” attached. 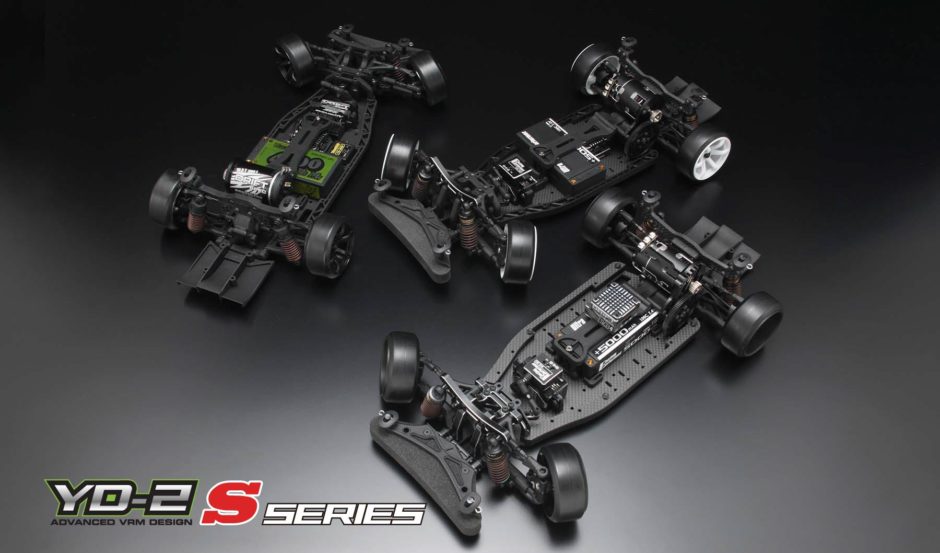 Although it was RWD drift style swollen at a stroke with the release of the original YD – 2, as the setting suited to the situation was progressing at various circuits on the other hand, it seemed that it was somewhat difficult to be difficult on the low grip road due to the good response of the machine. So Yokomo’s team started a big task of reviewing the balance of the machine. In the setting, we redesigned the part which can not be covered from the basic construction of the machine, also correspond to the low grip road surface, finally the combination of the single deck chassis and the high mount motor S series was born. YD-2 S equipped with reasonable and easy-to-handle resin chassis, YD-2 S PLUS fitted with carbon chassis and aluminum shocks, and high-end models YD-2 SX using plenty of aluminum and graphite parts Line up was done.

Common to both series is that it is a 4 gear transmission in which the counter torque when the motor accelerates (the force that the rotor trying to rotate attempts to rotate the motor case to the opposite side) pushes the rear tire. When decelerating, traction is apt to be applied to the front, rear traction is easily applied when accelerating, it is also a big feature of the YD – 2 series which is easy to match the driving feeling with the driving situation.

The mission case of the YD – 2 E series has four gears placed on the motor, and by mounting the motor which is also a heavy object as much as possible at the rear as much as possible, the rear traction is further raised and the high motion performance is acquired with a low center of gravity design . It responds swiftly to changes in subtle drift angle during cornering, and quick and dynamic turnover is a big weapon in the competition.

In case of RC drift using a sliding tire, it is theory to aggressively roll the machine on a low grip road surface to obtain grip, but when trying to realize it with a machine with low center of gravity, roll (lateral direction) and Sometimes the balance in the pitching (forward and backward) direction gets worse, and it was the S series high mount motor that fundamentally solved it. By raising the center of gravity position, it is easy to obtain traction on a low grip road surface, matching with the movement of pitching also widened the road surface correspondence width greatly. However, simply moving the motor to the mission case just blindly will result in a lowered exercise performance, so Yokomo intends to develop a new mission case dedicated to high mount motors and acquire the best balance unparalleled elsewhere did. Furthermore, since the motor mount of the S series can move the motor position back and forth, it is possible to respond precisely to severe road conditions by fine adjustment of the weight balance.

E vs S Traction balance due to differences in chassis configuration

The configuration of the main chassis is also one of the big differences between the two series. First of all it is the E series of double deck chassis which is common in touring cars, but while maintaining the torsional rigidity of the main chassis supple to a certain extent, by installing the upper deck, the pitching rigidity is raised. Even in a low-center-of-gravity chassis configuration, it is a great merit that mobility performance and traction can be obtained by tightly transferring weighted movement forward and backward. Furthermore, in addition to changing the rigidity due to the material of the main chassis, as the upper deck can also be changed, the combination increases, making it easier to choose the chassis stiffness balance according to individual driving style.

On the other hand, the S series has a single deck structure without an upper deck. Although the pitching rigidity of the rear side is improved with the battery plate, the vicinity of the steering servo is connected only around the front with only the main chassis and the side plate. As I mentioned earlier, the high mount motors of the S series produce aggressive rolls, but in fact they also generate great forces in the front and rear direction during acceleration and deceleration, so when combined with a double deck chassis with high pitching rigidity, There are disadvantages such as steering response becoming too high. Therefore, YD – 2 S dare to deduce the abrupt load transfer to the front by daring to be a single deck, finishing the operation feeling of the steering slightly mild. By optimizing the balance of roll and pitching with a hybrid structure with the side plate and further combining with the number of screws of the side plate and the optional graphite reinforcement bar, the variation of the rigidity balance is expanded.

The S series pursues the balance of the chassis and has dedicated it to a rectangular lithium polymer battery of short size. Although it will be able to restrict the battery, matching with a high mount motor is good because it is finished with sharp characteristics compared with the roll and pitching movement when a long battery is installed.

Although the YD – 2 S series is a conventional rear suspension arm, the S – series originally has a shape that does not regulate the down stroke because the setting that regulates the rear stroke is not required for the low grip road surface. Therefore, even with conventional arms, it is possible to secure enough down stroke.

Change in running characteristics due to differences in chassis material

Both the E series and the S series have machines for plastic chassis and graphite chassis. Apart from the series differences as mentioned above, there is also a tendency for the difference in running characteristics due to the material of the main chassis.

First of all, the resin mold chassis used in the most basic YD – 2 E / YD – 2 S of both series. It is supple material compared with graphite material, because material price is relatively inexpensive, it is a material often used for low price machines. However, it is not a bad driving characteristic because it is cheap, and in some cases it can be said that it is higher performance than graphite material. Because the chassis itself is supple, it is easy to grasp the road surface, and it shows a high stability feeling even in a low grip situation. RC drift is a chassis made of material that is suitable for drifting because it uses a hard tire to easily pick up fine asperities on the road surface and absorbs the vibration. We will also distribute the weight of heavy loads on the chassis appropriately, so even if the setting of the suspension is somewhat worse it will show stable running characteristics, so it is also recommended for beginners with little know-how.

The graphite material, the so-called carbon chassis, is attractive due to the high response of the rigidity. Since it responds exactly even when changing settings, it is very attractive for expert drivers with know-how. Even when driving at speed, there is no chattering yore, and even dynamic driving makes me feel the limit height. Although it may be felt that the allowable range of setting is somewhat narrower compared with resin chassis, it can be said that it is a chassis easy to set up in a sense because it makes it easy to feel the difference. And above all, the luxurious feeling of graphite material is an important point that meets owner’s desire to possess before the driving characteristic. The high-grade matte graphite material used in the YD-2 series is high-performance, and finishes the look of the machine to a high sense, it creates an atmosphere that imagines high-level running. 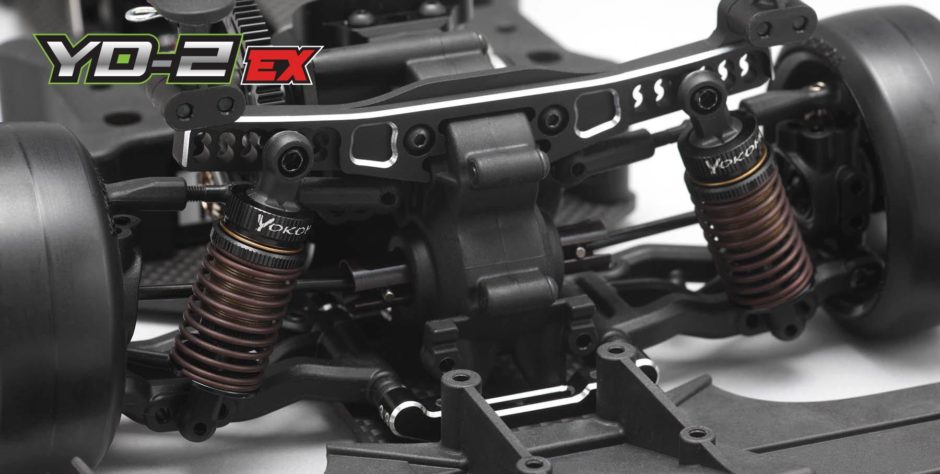 The E-series top end machine YD – 2 EX is attractive with abundantly equipped optional parts. Front and rear shock tower, front bulkhead, steering bell crank, rear brace, rear brace support, front and rear suspension mount, SLF big bore shock, servo mount and much more parts are made of aluminum, bevel edge treatment is applied to black alumite It is a profound feeling of fullness in the designed design. Of course the main chassis and upper deck also have a matt finish that matches both repulsion and suppleness Graphite’s narrow type, the contrast with aluminum parts is a beautiful finish. 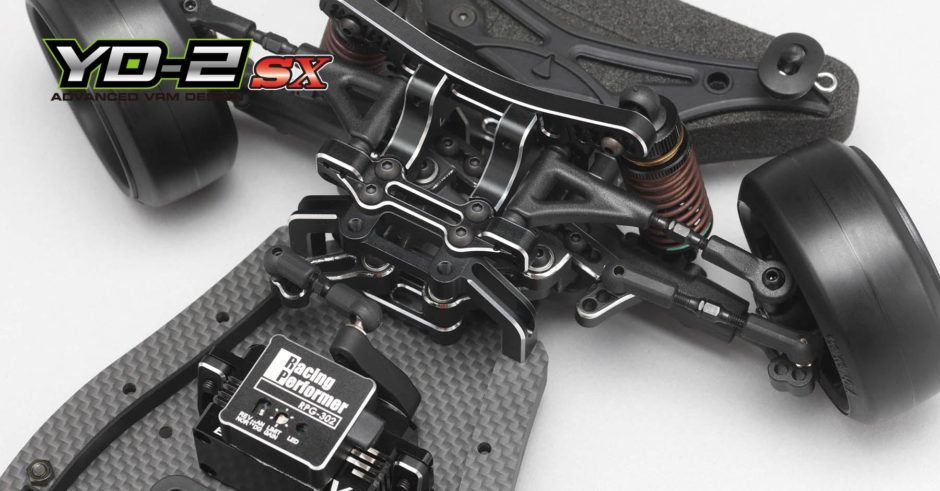 Although YD – 2 SX also uses plenty of aluminum parts, we are introducing new design parts that further enhance fighting power. First of all, aluminum split type steering system. By dividing the center link it is possible to move the tie rod attachment position and it is easier to set the Ackermann ratio according to the tread width. Of course, the setting width of Ackermann ratio also spreads widely, it is possible to set it more precisely than before so it became easier to set it to your favorite characteristics. Furthermore, the standard can set the motor position of 3 stages, whereas the SX using the special motor mount can select the position of 7 stages. Although the swing widths in the front and rear are the same, fine adjustment is possible by changing the position finely.

This is a direct YOKOMO TRANSLATION

Grab your YD2 TODAY! Check out our lineup!