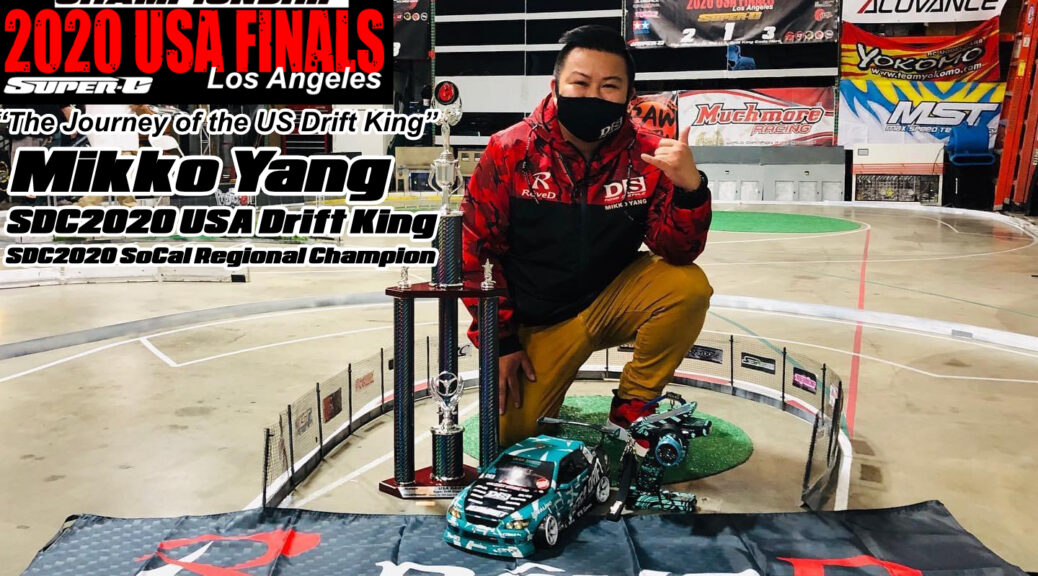 Proud doesn’t begin to describe the feeling I have being able to write something like this about a long time friend I have met through R/C Drift. Mikko Yang has been into R/C Drift for what seems like forever. When we opened doors here, he was part of the very first group who gave us the drive to pursue what the world has come to know as Super-G.

Mikko has participated in just about every competition we have held here at Super-G since the very beginning, only missing very few when it just wasn’t possible for him to get here. He has even flown back early from a golf tournament in Las Vegas just a couple hours before the start of one of our comps. It just goes to show his level of dedication to the hobby.

I like to think of Mikko as Mr. Consistent. He is always ready for the next competition, and even on his worst days, you will most likely find him finishing the competition on the podium.

Back a few years, Mikko picked up a Yokomo Factory Team Sponsorship. I can say just about all of SoCal felt a sense of pride knowing one of our own was able to land a sponsorship from quite possibly the biggest name in R/C Drift. I know all of us here at Super-G did.

More recently, Mikko picked up a ReveD Factory Team Sponsorship which again, the SoCal community can’t help but feel proud of Mikko once again. We all appreciate all the help Mikko provides with his knowledge of their products, not to mention the undeniable skills and driving style he brings with him.

At the start of this year, the Super Drift Championship 2020 Series kicked off. Of course Mikko was a part of it and as everyone expected, he was consistently on the podium. Consistently as in every round! Mikko was able to secure 2 – 3rd Place finishes, 1 – 2nd Place finish, 1 – 1st Place finish, and 1 – TQ (Top Qualifier). This gave him enough points to also take the title of SoCal Regional Champion as he entered into the Super Drift Championship Finals.

Super Drift Championship 2020 Finals
All of Mikko’s hard work had boiled down to the SDC2020 Finals here at Super-G. With the SoCal Regional Champion title under his belt, I knew he was coming in with his confidence high. It was obvious Mikko knew what was on the line and he wasn’t taking it lightly.

Throughout the entire competition, Mikko threw down some amazing runs. Even battling his very own teammate, Shaine Collins and beating him by the narrowest of margins. The list of people Mikko had to battle was basically a group of drivers very familiar to the Podium. Jason Ragasa, Shaine Collins, Colby Bradley (TQ of the Finals), Hao Huang, and finally Chris Lagasca. These are all heavy hitters in the R/C Drift game. There was no doubt the title was not just given to him.

For 2021 season, it’s clear Mikko is the man to beat. I can not think of a better person to wear the crown for the very first Super Drift Championship Series. He has been putting in the work and has been proving himself time and time again. Can Mikko pull it for for 2 seasons in a row? Who’s going to step up and put him to the test? We’ll all find out next year at the 2021 Finals!

Congratulations Mikko (2020 USA Drift King).
I think the US can be proud of what you have accomplished thus far.