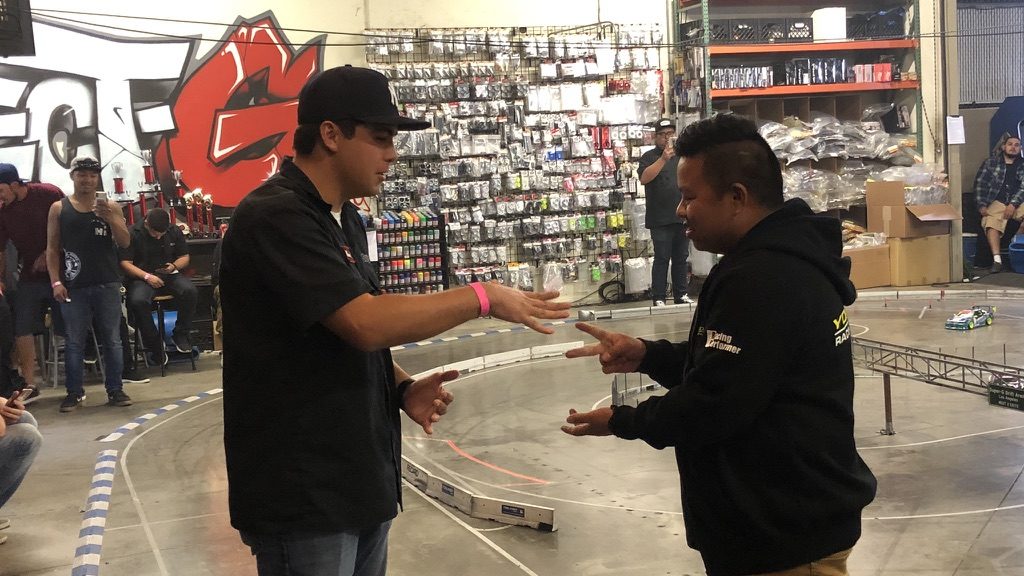 October 19, 2019:
The year long series, SuperShowdowns here at Super-G have come to an end at the Super-G 5 Year Annual Event! This season has been exciting to say the least, but more than that, we have seen HUGE improvement all around. The driver’s skill has increased tremendously over the past year. In addition to the drivers themselves, our judging, rules, and efficiency have grown beyond our expectations. Finally, our Super-G Replay System has come to the point where we feel very comfortable with how everything is working together. All this combined has made for a Competition Series we can all be proud to be a part of. 2020 promises to far exceed 2019.

SuperShowdowns are a monthly competition, each separate from the rest with trophies awarded for the podium finishers. We have also been running a points series in the background. The points would only come into play at the final competition of the series, where we would add the points and crown the SoCal Drift King. To keep things sane, we decided to drop each competitors 2 lowest rounds, allowing for missed rounds without blowing the series. If you missed more than 2, you were on your own.

Judging
For the entire series, myself, along with Colin Chambers and Shaine Collins were the Official Judges. I need to give a special thank you to both Colin and Shaine for not only being the most reliable judges, but for showing a true passion for judging fairly. For myself, I consider each and every person who comes through the doors of Super-G to be “one of my guys”. So I would love to see everyone win. However, for Shaine and Colin, they are both very good friends with a couple of guys who were always battling for the top positions. I can say without reservation, I never once witnessed even the slightest hint of favoritism or bias. Our desire to make the correct call far surpassed any type of loyalty or friendship. Having the entire crowd watching any of the replays we were reviewing ensured there was no funny business going on. So on behalf of Super-G and the SoCal Drift Community, I would like to give a huge than you to Colin Chambers and Shaine Collins. Two of the finest judges in the game today.

The Points
Coming into the Finals, Kevin Motter had secured 1st Place at the conclusion of Round 10, but the real battle was for 2nd Place! Mikko Yang and Jason Fordyce were tied in points for 2nd, but the reality was everyone in the Top 13 could possibly land 2nd or 3rd place. Needless to say, coming into the finals was exciting!

Qualifying
Since the Finals were held at the Super-G 5 Year Event, the entries were more than usual! 50+ competitors over the weekend was no joke. We decided to create 2 classes. We originally called them Rookie and Expert Class, but we will revise that for any upcoming events. Everyone ran their 2 qualifying laps, and the judges decided who belonged in Rookie or Expert based on their performance. There were many key factors, and in the end it seemed to be the right call. There are people who are ready to compete at the expert level after a month, and there are people who should be competing in Rookie in their second year. Let’s keep it fun!

I normally try to keep my personal feelings out of the recaps, but I need to get personal on this round. It was obvious to me that everyone came to put down their very best for the Finals. Mikko seemed to bring out the big guns this round and pulled off what I feel is his best qualifier ever! I was pretty confident he was taking TQ with 2 back to back blistering runs. I always try to keep an open mind as a judge, but I just couldn’t help but feel that was the best we were going to see for this round. A few runs later, it was Kevin Motter’s turn. Knowing how focused Kevin can get, I knew there was a slight chance he could pull it off, but replaying Mikko’s run back in my mind, I new it wasn’t going to be easy, if not impossible. Wouldn’t you know it, Kevin pulls off an amazing first run! Equal to Mikko’s. I couldn’t say better, but I could easily say it was equal. Kevin’s second run is another amazing run! Better than Mikko’s? We all felt they were just about all the same runs. ALL 4 RUNS WERE BASICALLY THE SAME!

It was down to one more qualifying run for each of them. Mikko won the Rock, Paper, Scissors match, so he chose to go first. Amazingly, he was able to put together another insane run! Then it was Kevin’s turn and in typical Kevin fashion, turned it up a notch and cut his margin of safety in half. There was no denying he was going to the limit in each clip, earning him the Top Qualifier Position!

For myself, a very notable happening this round was my fellow judge Shaine Collins and his qualifying. For the entire season, he has been finding himself on the lower end of the qualifying, but he pulled it together this round and pulled off a 3rd Place qualifying run! I could not be more proud of him. Great job Shaine!

The Tsuiso Battles
There was a lot going on with these battles and we ended up with more battles than we anticipated. In the end, these battles are what this day was about, and we had a lot of trophies that needed to find new homes!

Quite honestly, by the time we got to the Semi Finals, my brain was fried. I cannot for the life of me recall any of the runs. I’m sorry for keeping this short, but it took everything I had to stay focused on the individual battles. In the end, it was Bret Trevio (Team Slidelines) vs. Mikko Yang (Team Yokomo USA) for 3rd and 4th. Mikko came out victorious landing him on the 3rd spot on the podium, while Bret took a very respectable 4th Place!

Then it was time for the Finals, Kevin Motter (RawFew) vs. Tim Mulhmeyer (Team Rhino). Kevin ultimately came out on top, landing him at the Top Spot on the podium for First Place! Tim took a hard earned and very deserved 2nd!

Congratulations to all the winners this past weekend! Everyone displayed an amazing level of skill! We can’t wait to see what 2020 has in store for us!