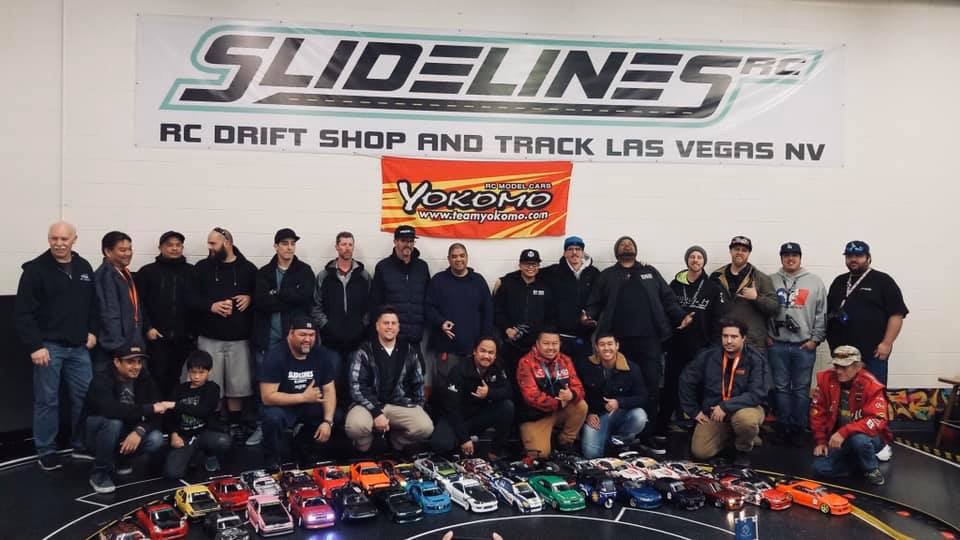 February 26, 2020.
A quick turnaround trip to Vegas is always a good time, and this weekend was no exception. Good people, good food, good slides, good vibes, and an exciting comp all came together to make for an awesome event!

This past weekend Slidelines R/C in Las Vegas, NV kicked off their Super Drift Championship Regional Series. In addition, they paired it up with their One Year Anniversary Event. Of course Super-G wanted to be there to celebrate with our brothers in the next state over. We weren’t sure how we could make it all happen since there is a lot going on here at home, but it looked like a turnaround trip could do it.

Joe and I booked a flight for Saturday morning and we were off to Vegas for some slides! We met up at Slidelines with our SoCal Fam: RawFew: Nick Lepisto and Jason Fordyce, Team Zenshin: Mike Underwood and Daniel Yribe, Team DStyle: Mikko Yang and Shaine Collins, Swift Suns: Max Wilkinson, Tech1Drift: Alfredo Chan III, And Ted. Quite honestly, it felt as if were were back at Super-G. SoCal had a strong showing for this one!

When we arrived there were a few pits set up out front under some EZ Ups, so we all decided to pit there. Within minutes, it starts pouring rain! I could only feel the pain Bret, Dillon, and Eddel were feeling as I’ve been through that exact same ordeal. Big event and rain! Luckily it passed quickly and nobody really skipped a beat.

The comp was some serious fun! I had a horrible qualifier and actually crashed on both my runs. I figured I was done for the day, but I later found out they were using qualifying for the purposes of bracketing, not so much for qualifying or not. I battled my way up from Last (Probably) and ended up in a battle for 3rd against my fellow Super-G Judge, Shaine Collins. I knew Shaine was going to put it down, but I also knew we would be able to have clean battles. We both frown upon tactical driving, so it was all about just putting down the very best we could. The first round ended in a OMT! That just made it that much better. I ended up coming out on top for the next round, but I’m sure it could have gone either way really easily.

Congratulations to the winners, Alfredo Chan III on taking the win! Mike Dedmon taking Second Place. It was an honor to share the podium with you guys!

The event was a huge success and everyone had a great time. A huge thanks to Bret, Dillion, Edel, and Mike for putting on such an awesome event! It was just too much fun! We can’t wait for the next one!!!