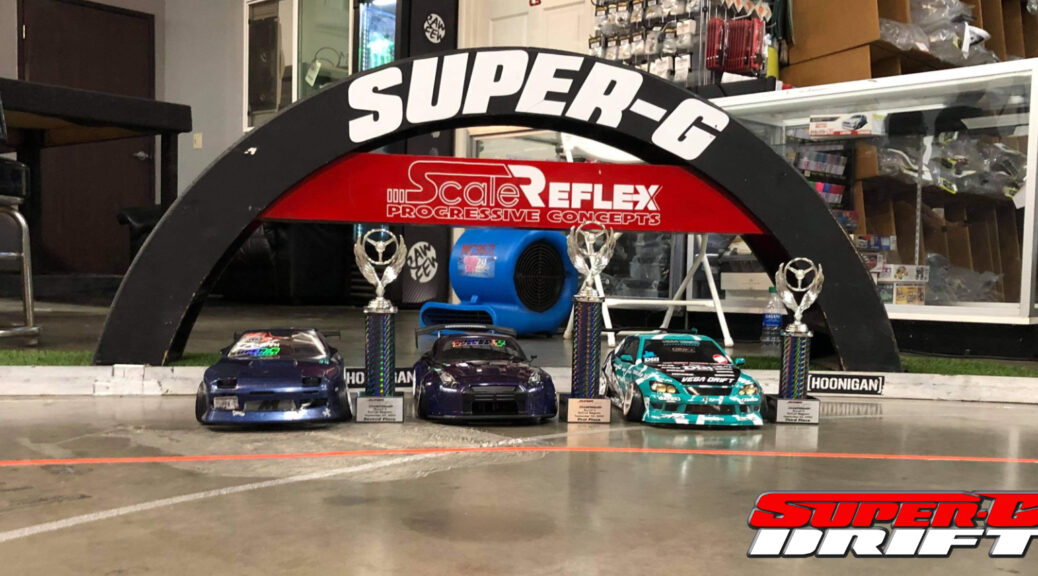 This past weekend was the restart for the Super Drift Championships here at Super-G for Round 3. It has been a long road for us since the start of the pandemic and our move from our original location. We literally hung our last security camera 30 minutes before opening. Talk about cutting it close!

With so much going on in the world right now, it wasn’t a surprise we were missing a few people who started the series with us earlier this year. At the same time, we gained quite a few more and a good amount of rookies as well. Eleven to be exact.

The judges for the event were Shaine Collins (Team D-Style), Manny Campalans (RawFew / Team Futaba USA), and your’s truly, Steve Fujita. It was good to be back at it, and surprisingly we were able to get right to it without skipping a beat. When we finally compared our scoring for Qualifying, we were all within a point or two which was typical when we were doing comps regularly. Great job Shaine and Manny! Judging is no easy task, so we all owe these guys a huge thanks!

Qualifying:
Everyone did really well, even the guys who were in the Rookie Class. For many it was the first time ever driving alone with people watching, but everyone stepped it up and did great! Depending on the skill level we as judges separated the Expert and Rookie Classes. This has been working well for us. The winner of the Rookie Class automatically advanced to the last spot in the Expert Class Brackets.

For the Expert Class, there was a tie for Top Qualifier, Mikko Yang (Team ReveD/Team D-Style) and Colby Bradley (Team Zenshin) with a score of 94/100. Both these guys were on fire all day! They both got one more qualifying run each as a tie-breaker, no scoring, just who could put down the best qualifying run. Mikko Yang ran a near flawless run to take the Top Position and the Slide Ti Top Qualifier of the event!

Tsuiso Battles (Rookie)
Next up was what everyone was waiting for. The Tsuiso Battles. First up was the Rookie Class. The idea being the Rookie class is to get the guys together to battle it out against others with similar skill sets. Not quite ready to battle the hardened experts. This class had proven to be exciting and fun to watch!

It came down to Austin Gregono vs David Sissum III for 3rd and 4th spot, and Andrew Jun and Michael Gray for 1st and 2nd. First up with Austin vs. David. Both were having good runs but on the last hairpin Austin spun, giving David the clear victory. Then it was time for the Rookie Finals, Andrew vs. Michael! Again these were some pretty good runs, but right at the end at the tricky hairpin, Michael spun, giving Andrew the well deserved win, and First Place! This also allowed Andrew to move into the last position in the expert class. Congratulations to Andrew!

Expert Class
This is where the best SoCal has to offer come to show their skills. This round was no exception! The constant evolution of driving never ceases to amaze. When all was said and done, it came down to the Top 4. Mikko Yang (Team ReveD / Team D-Style) vs. Karlo Malabana (Team WallRide) for 3rd and 4th, and Nick Lepisto (RawFew / Team Futaba USA) vs. Colby Bradley (Team Zenshin). The Top 4 was no surprised to anyone, but looking at the driving in the Top 16, anyone in that group would have been right at home in the Top 4!

First up was Mikko vs. Karlo. Both drivers pulled off some amazing runs, but in the end, Mikko managed to hold a cleaner line throughout the course, securing 3rd place and his spot on the podium!

Finally it was down to the last two men standing, Nick Lepisto vs. Colby Bradley for the top podium spot! First was Nick on the lead and Colby on the chase. Nick lays down a near perfect lead run and Colby was right on him the entire time! It was top level driving at it’s finest. Then It was Colby’s turn to lead and Nick’s time to chase. Colby puts down a great lead, and Nick answers back with even tighter proximity on his chase than Colby was able to put together on his chase. This was enough to put Nick over the top and onto the top spot on the podium! Both drivers did amazing!!!

Slide Ti
Zerek (Slide Ti) generously gave a sick Slide Ti Titanium Turnbuckle Wrench to the TQ of the day, Mikko Yang, and a serious Slide Ti Tool Kit for the Top Podium Winner, Nick Lepisto! The took kit has everything you need for your trackside adjustments and repairs, all with that distinctive Slide Ti look!

Congratulations to Nick Lepisto (RawFew / Futaba USA), Colby Bradley (Zenshin) and Mikko Yang (ReveD / D-Style) for holding it down in SoCal! All 3 had some fierce battles to overcome to rise to the top!

Special Thanks to Brandon (Ted) Britt (Ritmo), Shane Mikula, Juan Gonzales, and Austin Blines (Team Nostalgic), Don Coles, Eddie Reyes, and Michael Gray (805 Drift), and Gerald Maugen, Joseph Maugen, and David Sissum III (VCRC Street Rides) for making the trip out here to join us! We know it’s a ways for all of you!