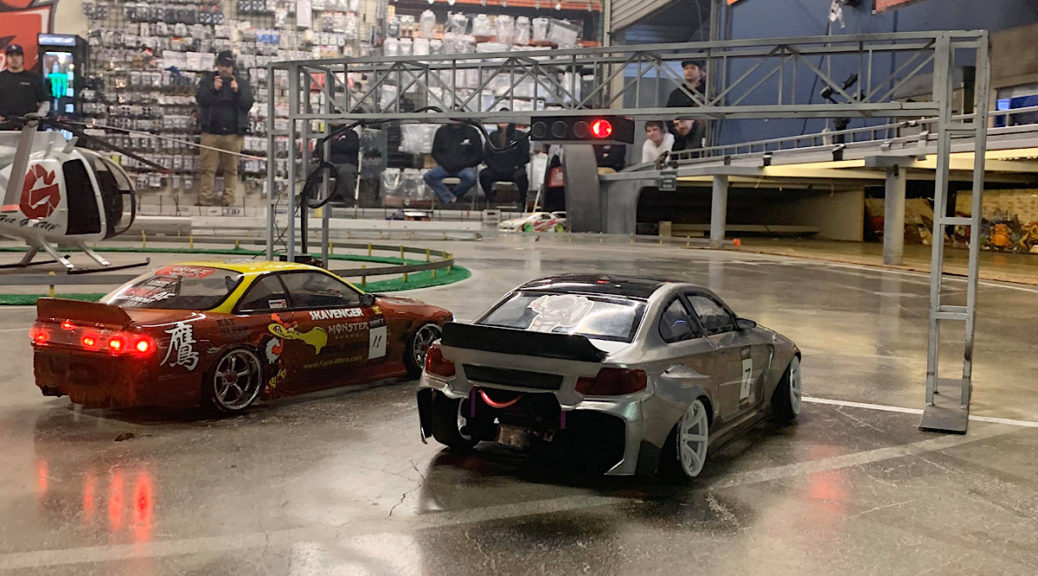 March 7, 2020
This past weekend was the Super Drift Championship Round 2 for the SoCal Region here at Super-G R/C Drift Arena. We had a great turnout with 37 competitors, many new faces, and a lot of serious skills.

The judges for the event were Shaine Collins (Team D-Style), Manny Campalans (RawFew), and myself, Steve Fujita. Joe Tam was emcee for the night, as well as running our audio/visual and live stream. He really is a one-man entertainment center.

In Round 1 we ended up running really late and qualifying took forever. So for Round 2, we offered to do early qualifying in hopes of speeding up the actual competition. When we announced it, there were no responses, so we just went on as planned. I later found out there were a couple people interested, but hardly enough to warrant breaking up practice for.

The reverse layout proved to be challenging for many, but we always try to switch it up for every comp. This round we went with more inside clips than outer. This seemed to push everyone to dig deep for those skills they normally don’t use heavily.

Qualifying:
This round us judges decided we would not discuss the qualifying runs after each run, but rather write down our scores and add them at the end. This helped to move the qualifying right along and was a better overall way to run it. I was pleased to find when checking the scores, all three judges were within a couple points of each other. Further reinforcing the fact our point system is working and is consistent.

Futaba Top Qualifier!
Futaba has generously donated to sponsor the Super Drift Championship here at Super-G and this round the winner of the Futaba Top Qualifier went to Manny Campalans from (Team Futaba USA / RawFew). He had his choice of the new CT700 Servo or the GYD450. He chose the GYD450 Gyro! Congratulations Manny on a awesome qualifying run!

Tsuiso Battles:
I know I say it every time, but when the driving is at this level, it really deserves to be mentioned again. The driving skills demonstrated here in Round 2 were really top notch. Most of the battles were won or lost based on some of the smallest margins we have seen. What this means for the future is, competitors really need to step up their game and pay attention to the finer details now.

In the finals, it was Mikko Yang vs. Albert Martinez for 3rd and 4th position, and Aydin Angulo vs. Victor Romo for 1st and 2nd.
First up was Mikko vs. Albert. Mikko had a great lead run and Albert had a great chase. They switched positions and this time Albert was leading, Mikko chasing. On the first clip Albert had gone wide and hooked his wing on the fence and an extension cord that was behind that. This gave Mikko an easy win, and the 3rd spot on the podium. Then it was time for the big dogs, Aydin vs. Victor for 1st and 2nd. On the first run, both Aydin and Victor made contact and forced a OMT (One More Time). On the second run, it came down to the first clip and who did it better. This time around it was Aydin who put it down for the win and the top spot on the podium! Victor took home a very respectable 2nd place!