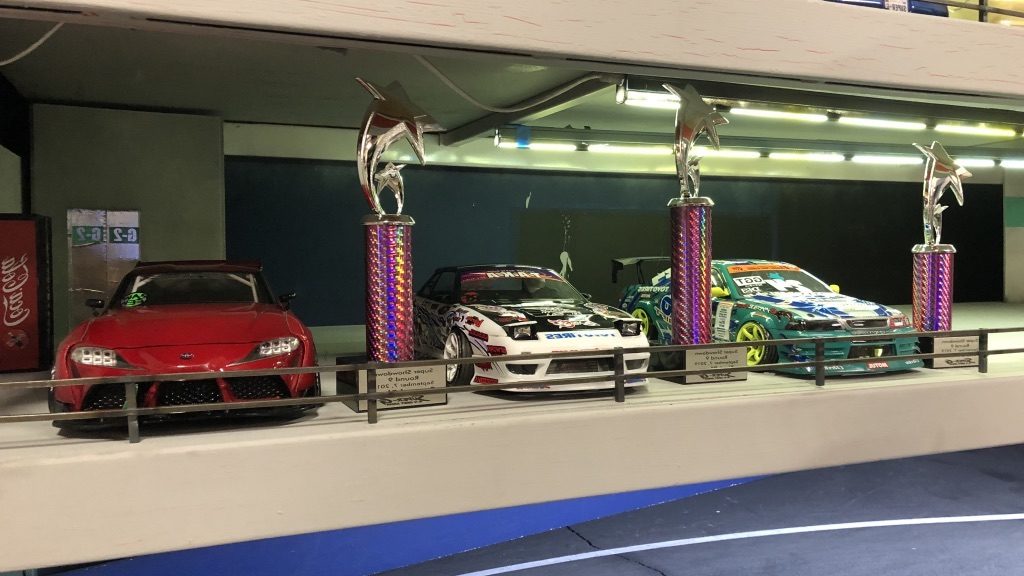 Wow wow wow!!! This past weekend had some insane driving going on! I know I usually say the driving was exceptional, but this weekend in particular was full of incredible runs. I have to say, if you want to test your skills, Super-G SuperShowdowns are definitely the place.

New Layout and Judging Aids
Since we have been seeing such good driving recently, I has thought it could be due in part to running a familiar layout. So this round we changed it up and also added some magnetic cones to help with judging some of the harder to see areas. Simple and straight forward, knock over a cone, you are too far out of bounds.

Qualifying:
The qualifying rounds this weekend were impressive. The majority of the drivers were within a few points of each other. However, the Top Qualifier of the event was a full 2 points above the nearest competitor. Jason Fordyce threw down an AMAZING pair of qualifying runs. Both were enough to lock down TQ, but his final run outdid his previous which had everyone left speechless. Congratulations Jason for a commanding TQ!

Tsuiso Battles:
The Tsuiso battles are the core of what the Super Showdowns are all about. This month we had 18 competitors, so we made a Top 18 bracket.

This month we were a little short on the judging with Colin “Cool Breeze” Chambers MIA. So it was left to Shaine Collins and myself. Since we have access to the Super-G Replay System, we didn’t skip a beat. Not only can the judges review the runs from multiple angles and in real or slow-motion speed, but the spectators and competitors can also see what the judges are reviewing. At this point, everyone is pretty clear on who and why, and the judges just give the final say. The Super-G Replay System is a very necessary judging tool, as we have found the human eye misses quite a bit.

The Top 4:
I usually start my recap at the Top 4, but this weekend the battle between Kevin Motter and Mikko Yang to decide who battles for 1st and 2nd were the most intense! It was so close, we had to go to OMT (One More Time) twice! It came down to reviewing on the Super-G Replay System to finally make the call. without the replay system, it would have been impossible to see the deciding factor. In the first clip, Kevin fills the entire clip for the full length. Mikko entered the clip, then his line takes him outside of the clip, then back in to complete the zone. Both appeared to fill the clip, but from the Birdseye view it was clear Kevin deserved the win.

So for the Top 4, it was Josh Espinoza vs Mikko Yang for 3rd and 4th, and Jason Fordyce vs Kevin Motter for 1st and 2nd.

First up was Josh vs. Mikko! Josh threw down a great lead and Mikko answered back with a great chase. Then on Mikko’s lead, he put down a really clean lead run and Josh actually had better proximity, but as fate would have it, he was a little too close on one of the transitions, interfering in Mikko’s transition and giving Mikko the 3rd spot on the podium.

Then it was time for the finals! Jason vs. Kevin. These 2 are no strangers to battling it out for the top spot. Great friends and teammates, these 2 really put on their game faces when it comes to winning. They both act like they don’t care, but we all know better! Ha! First out was Jason on the lead. Being TQ of the night we expected to see a great run and he didn’t disappoint. Deep in the clips with a lot of angle! Kevin did his usual and was right on Jason’s door for the entire run. Amazing run! Then it was Kevin’s lead. As expected, Kevin went deep and Jason was right there within mere millimeters. Unfortunately Jason had a miscalculation and had slight contract with Kevin, then found himself having to let off to avoid contact, allowing Kevin to pull away with a smoother line and also the Top Podium Spot! Jason takes home a well earned 2nd, and his teammate Kevin takes home the win!