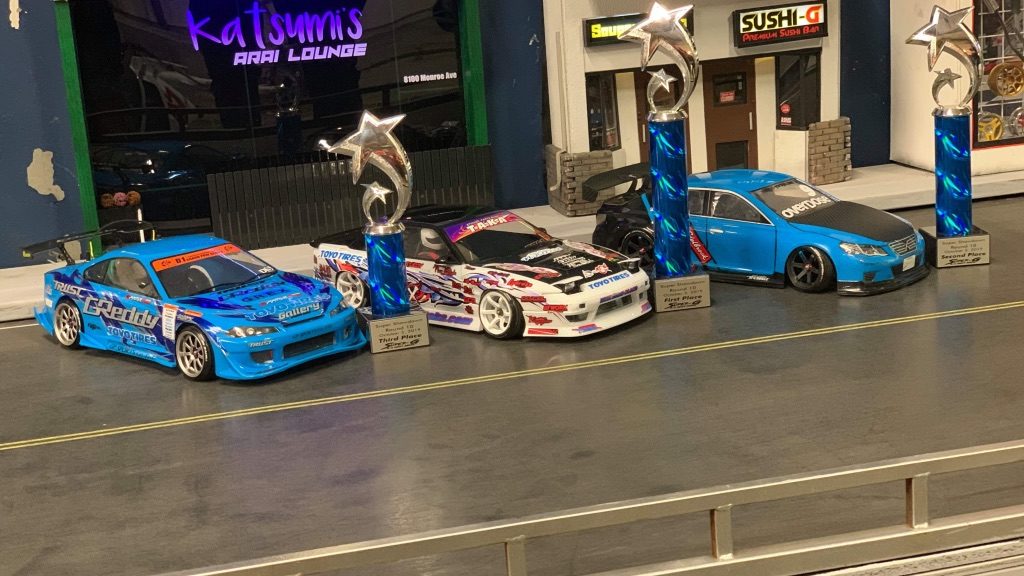 IF YOU WEREN’T HERE FOR SUPERSHOWDOWN ROUND 10, YOU MISSED OUT!!!

We Used The Entire Track:
For the final 2 rounds we decided to run the entire Super-G lower level track, under the bridge and all. I had to set up cameras for that, but once it was set, we were ready to go.

Qualifying:
As always, the qualifying is impressive. It’s apparent it’s been figure out that you need to get on the board with a decent run, then try to lay down the best you can do to shoot for that Top Qualifier position. There was no doubt there was at least one run from most everyone that was meant to be the run of runs! In the end, Kevin Motter threw down a ridiculous set of qualifiers that left little room for anyone to top. Mad angle, deep in every clip, and all but touching every rail possible. Congratulations to Kevin for a well deserved TQ of the event!

Tsuiso Battles:
The Tsuiso battles are the core of what the Super Showdowns are all about. This month we had 17 competitors, so the last qualifiers battled for the 16th spot in the top 16. Manny Castaneda came out victorious and grabbed that last spot!

This month we were missing our third judge, Colin “Cool Breeze” Chambers, so it was left to Shaine Collins and myself. Again, since we have the Super-G Replay System, there was no issues with judging with two. Really it comes down to the judges having a firm grasp on the rules and what applies where. The rest is on the replay for everyone to see. The Super-G Replay System is a very necessary judging tool, as we have found the human eye misses quite a bit.

The Top 16:
When I started by saying if you weren’t here, you missed out, I wasn’t kidding! These guys all came out swinging! The mood in the pits prior to the battles was light and friendly as always, but when it came down to throwing down against friends, the gloves came off. Was it the double points? Was it that everyone was feeling their tune? Whatever it was, these guys were out for blood this time around! This weekend was full of the tightest transitions, closest proximity, insane wall rides, and the most aggressive driving we have seen thus far. After each battle, it was back to hanging out with the homies. In all seriousness, this is what we want to see.

The Top 4:
After some wicked battles, the Top 4 came down to Corey Carlstrom vs. Jason Fordyce for 3rd and 4th, and Kevin Motter vs. Alan Benites for 1st and 2nd! Tension was high since all these drivers had been on fire all evening. We knew we were in for some serious battles!!!

First up was Corey vs. Jason. Long time friends from different teams, Corey representing Team DStyle and Jason representing RawFew. The first run was very interesting. Corey was on the lead, Jason on the chase. Corey had a great lead going on, and Jason was right his door with a spectacular chase. Coming into the Super-G Roundabout, Corey went right to the rail, and Jason answered with a smooth bumper drag along the pickets on the rail. We as judges were impressed as we heard the clicks, but the pass was smooth! Then the unthinkable happened, Corey over-rotated and it caused a spin. Jason cruised to a clean finish. Then it was Jason’s turn to lead. The run was clean on both sides since both these guys put down a great lap!

It was obvious who won since Corey had spun on his lead, but as judges and since we have access to the Super-G Replay System, we wanted to make sure what we saw was really what took place with that super sick bumper drag.

Not wanting to take any chances of cheating anyone out of a win, we hit the replay. Keep in mind, there wasn’t a single person who thought there was anything out of the ordinary until the spin, but the replay ended up telling a different story! Upon review, Jason cleanly dragged the first 2 pickets on the rail, but the third caught his rear bumper just enough to bounce his car back. Definitely enough to be deemed a crash. This negated Corey’s spin which happened after Jason’s crash and effectively ended the run.

This gave Corey the win and 3rd place for the night!

Then it was time for the Final Battle! Kevin vs. Alan! Both these guys are capable of putting together some serious runs. This would turn out to be a crazy battle for 1st and 2nd!

First out was Kevin leading and Alan chasing. Alan put serious pressure on Kevin down the straight, forcing Kevin out of his comfort zone and causing him to make contact with the rail on the first hairpin earning him a Zero on his lead run. Something we rarely see from Kevin. Next up was Alan’s lead. In typical fashion, Kevin puts the pressure on Alan, and as fate would have it, Alan makes contact on the rail coming into the hairpin, earning him a Zero for his lead as well. Both chases were about the same length, so it was all about the OMT for these guys!

This time around these guys weren’t playin’! Kevin puts down a flawless lead, and Alan answered back with one of the most amazing chases we have seen here at Super-G! Then it was Alan’s lead, and Kevin gave him no room to one up him. The runs were nothing short of AMAZING, and worthy of the battle for 1st in our Double Point Round. Unfortunately for Alan, he had been just a tad too aggressive on the first straight and inhibited Kevin’s initiation into the hairpin. This was enough to be deemed a crash caused by Alan, giving him a solid 2nd Place finish, and putting Kevin at the Top Podium Spot with First Place!!!

Congratulations to Kevin Motter for landing Top Qualifier of the event, and also earning First Place!!! The field of competitors he needed to work his way through were without a doubt some of the best SoCal has to offer!

Congratulations are also in order for the remainder of the Podium winners as they too had to fight through some insanely good driving!

If this is any indication of what is to come for the Finals on October 19th, it’s going to be MINDBLOWING!!! Come out and test your skills against the best SoCal has to offer!