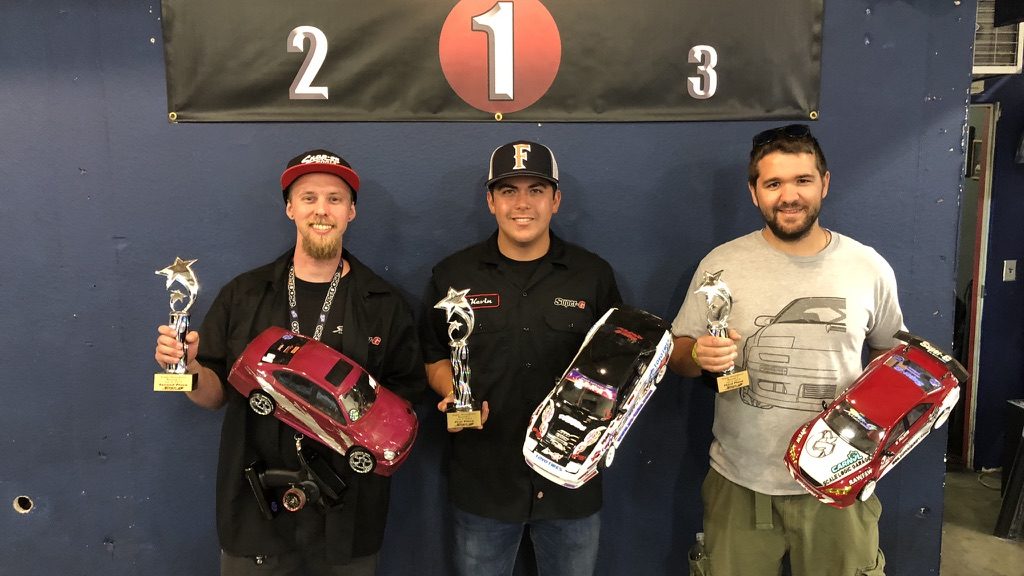 Being as this was a holiday weekend, we anticipated a small showing for the SuperShowdown Round 7. Much to our surprise, most of the usual suspects were present, so it would prove to be a really great event full of some exciting runs and some serious skills being put on display!

This month we were joined by one of our good friends, Daniel Tragner from Spain! He didn’t have his car with him, so earlier in the week we let him spend some time with our various chassis to find one that he would run for the SuperShowdown. He finally chose one of our Overdose Galms as his weapon of choice. This would prove to be a good move later that weekend. After deciding on the Galm, Daniel proceeded to get some practice laps in, and quickly his skills became very obvious. He’s no stranger to competition and R/C Drift. We were all excited for the comp!

New Layout and New Direction:
Since we have started this year with the SuperShowdowns, we have been running a clockwise direction, and always running into the Super-G Sweeper. This month I decided to give some of our comp regulars something a little more familiar. Since our friends from Team DStyle and Tech1Drift are used to driving counter-clockwise, I decided to reverse our direction and go with a straight into a lazy hairpin, something they are definitely more accustomed to.

Qualifying:
The qualifying was interesting to say the least. Even with the change up in direction and track style, everyone stepped it up and took to the new layout pretty quickly. The straight off of our sweeper allowed for some pretty decent speeds which made the entries to the hairpin exciting. Kevin Motter pulled off a near flawless qualifying run, but without warning, Jason Fordyce threw down an amazing lap with a blistering entry to the hairpin, narrowly avoiding contact with the wall by less than an inch. We felt this was enough to lock down the Top Qualifying position, but that was only Jason’s first pass. On Jason’s next pass, he came down the straight even more aggressively, and ended up dragging his rear bumper along the wall on the hairpin. The judges were speechless as we awarded Jason the Top Qualifying spot!!! I’m still not sure what I witnessed. Congratulations Jason Fordyce on TQ for the event!

Tsuiso Battles:
The Tsuiso battles are the core of what the Super Showdowns are all about. This month with the new layout, I wasn’t sure what to expect. I just knew it was going to be good. A few of the big guns had issues in qualifying, but they still had a shot since we have implemented the Super-G Bracketing System. The top 15 qualifiers are seeded and the lower qualifying drivers then battle in the lower bracket for the 16th spot.

The Judges for this event were the usual gang of thugs, Colin Chambers, Shaine Collins, and myself (Steve Fujita). Shaine and Colin always do such a great job. I go back after every comp and review the calls to improve our judging and also to see if we missed anything. I am proud to say we have been on point now for what is probably approaching 80 or so comps. Great job as always guys! We the community, owe these guys a huge thanks for always providing the best and most unbiased judging I have ever seen.

The Top 4:
First up was Hao Huang vs Daniel Tragner. Daniel being the new guy must have taken a lot of people by surprise. He was up against some of the podium regulars, and had successfully worked his way up to the top 4. Daniel was first on the lead, and he put down a great run! Hao doing what he does best, was right on his door for the majority of the run. These guys were definitely worthy of the top 4 group! Then it was Hao’s lead, and it was almost the same as we had just witnessed. Hao with a great lead, and Daniel right on his door for the chase. The deciding factor was Hao had a slight stall entering the sweeper, giving Daniel a better lead run and locking in the 3rd Podium Spot.

Then it was time for the finals, Kevin Motter vs his RawFew Teammate, Jason Fordyce. Both of these cats are no strangers the Top Spot, and both seemed determined to not let the other take the win. On Kevin’s lead, Jason was a little cautious entering the hairpin, causing him to lose a little proximity on an otherwise perfect chase. Then on Jason’s lead, Kevin was right on Jason’s door the entire time. That is until the final turn where he miscalculated and ended up slightly shallow. The judges decided this was going to be a OMT. For the next runs, both Kevin and Jason threw down some serious runs! Amazing if you ask me, but there was one difference. In the first clipping zone that seemed to not really matter, since the excitement was at the other end of the course, Kevin filled that clip as much as possible with a ton of angle, while Jason on his lead was barely skimming it. Both got the clip fully, but Kevin displayed his dominance, leaving no question as to who was going to put down the better run. This was confirmed by the use of the Super-G Replay System. We (the judges) along with the rest of the attendees, were able to watch the replay to confirm that indeed Kevin was deeper than Jason on that clip.