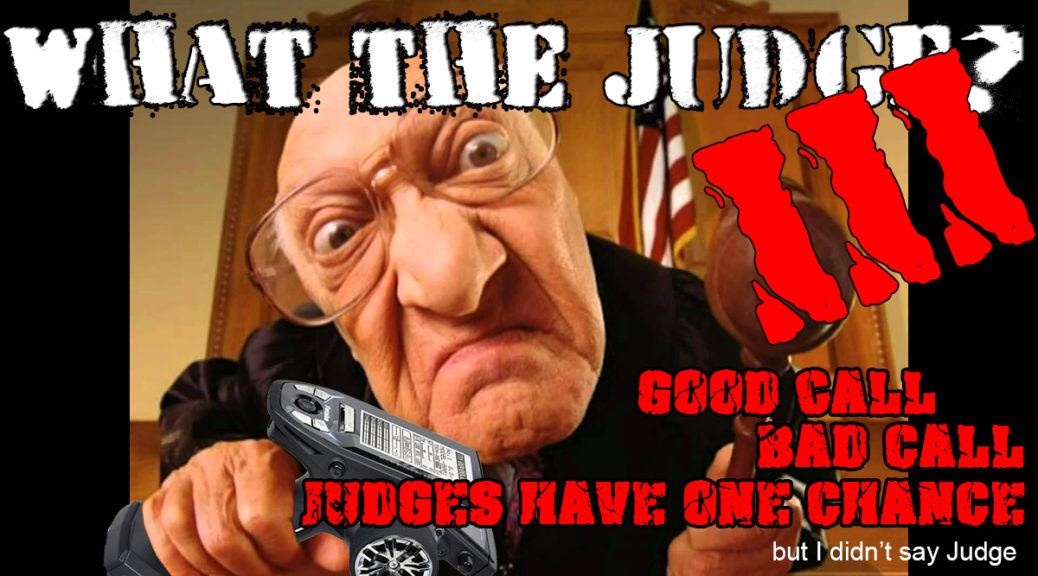 Here at Super-G we have been using the Super-G Replay System for close to 2 years now and it has really changed how we judge. The accuracy and the transparency it provides is really second to none.

In the past there were always calls the judges made that would leave a lot of people feeling raw. Depending on where you were watching from, if you were really paying attention, and even if what you thought you saw is really what happened, people would have different opinions of what really happened.

If you want to get the most of this post, don’t go back and try to figure things out. Just watch the footage ONE TIME and make the call as if you are a judge. Remember, you are watching in real time, and you only get one shot at it.

Did you catch it? What is the call? Remember, this could be someone’s one and only chance to win. Making the wrong call could possibly rob someone of their only victory. A OMT when someone rightfully earned the win is the same as robbing them. Oh the pressure of being a judge.

The biggest difference in judging with or without the reply system is how the judges think about each instance. For example, if a judge sees contact, they will make a mental note that there was contact made and who was at fault. That needs to be processed as it happens. I had seen it happen so many times where the judges would stop paying attention after contact was made, the rest of the run wasn’t even worth watching. Their decision was already made, and there was nothing more to see.

With the replay system, the judges will make a mental note that something happened at that point and they will need to review it. The run continues and the judges will watch the run in it’s entirety.

When the run is complete, the judges will decide if there are any areas that need to be looked at from different angles to confirm what they through they saw was indeed what actually happened.

Ok, let’s take a look at it from a different angle:

Did you make the correct call? Whether you called it correctly or not, without the Super-G Replay System, you would never be able to say the call was correct 100%. Also, there would never be a way to put the competitors minds at ease if they didn’t agree with your call.

In this particular instance, we felt the Chase Car made contact at the point where the sweeper starts to transition to a tighter hairpin. This caused the Lead Car to be knocked off line and ultimately over-rotate. Since we wanted to be certain that is what happened, we went to the replay to see it from a different angle. Without this angle, the call would have gone in favor of the Lead Car.

Due to the fact we have the replay system at our disposal, the call actually went the other way, in favor of the Chase Car who was just doing as they were supposed to.

This is just one instance where the Super-G Replay System was the only thing standing between the correct call and a bad call. Seeing how often things appear differently than what actually happened, it’s very obvious why there were so many upset competitors and why they would feel so strongly about how bad the judges were. I can’t really say I blame them.