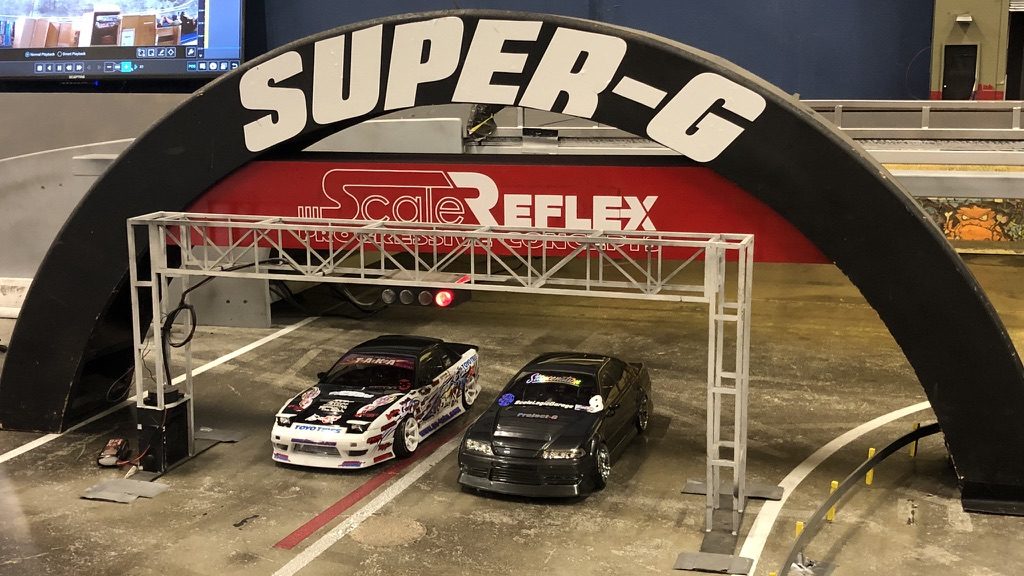 This past weekend was SuperShowdown Round 8 and it seemed like everyone was ready for a comp. The weather was pretty warm when we opened, so it seemed like waiting till it cooled down a little was the trend. There were a few people anxious to break in their tires, so we were glad we were open early.

This month our good friend Jeremy Meyer from Driftwell in Fresno, CA was able to come and join us for the comp. He’s a Super-G regular and no stranger to our comps. We were also lucky enough to have Philip Lucas, the owner of Skyhunter Hobby in Lancaster, CA come and get some slides on with us! They have a R/C Drift Track in their store and often host fun comps on Sundays, as well as being well stocked on drones and off-road R/Cs! Check them out if you have a chance.

The Previous Layout Returns
Since last month seemed to catch everyone a little off guard, we decided we would run the same layout and same line as last month. We expected to see everyone well adjusted and able to put together some good runs. We were not disappointed! The driving this month was top-notch!

Qualifying:
Qualifying was smooth as always. This time around everyone’s driving was on point, with 11 drivers within a couple points of each other. The end of the straight had the tricky semi U-turn with wall ride, but everyone seemed to take to it comfortably this round. Jason Fordyce, last month’s TQ threw an amazing entry and wall ride, but it wasn’t enough to lock down TQ again this month since Kevin Motter went ahead and laid down a near perfect run on the entire course. Congratulations to Kevin for being Top Qualifier of this round!

The Judges for this event were the usual gang of thugs, Colin Chambers, Shaine Collins, and myself (Steve Fujita). Shaine and Colin always do such a great job. I go back after every comp and review the calls to improve our judging and also to see if we missed anything. I am proud to say we have been on point now for what is probably approaching 80 or so comps. Great job as always guys! We the community, owe these guys a huge thanks for always providing the best and most unbiased judging I have ever seen.

The Top 4:
This month battling for 3rd and 4th was Mikko Yang vs. Tim Mulhmeyer. Both drivers had great lead runs, almost equal. However, these battles were decided on the chases. Mikko was able to maintain great proximity and matching Tim’s angle. Tim had great proximity, but at one point Mikko started to get away from Tim and so Tim shallowed on the Super-G Round-about to keep up, sealing his fate and giving Mikko the win! Congratulations to Mikko Yang for a solid and well deserved 3rd Place!!!

Then it was time for the finals, Kevin Motter vs his RawFew Teammate, Manny Campalans. This isn’t the first time these guys have gone head to head, and I personally think they both make each other nervous. First run, Kevin lays down his signature lead, deep deep deep in every clip, pinpoint accuracy piloting his car within mere millimeters of the rails, and all while holding mad angle! Manny snapped back with some great proximity for the entire run! Then it was Manny’s turn to lead. Out of the gate and to the straight things were looking great! The suddenly as Manny goes for the wall ride at the end of the straight, he made a slight miscalculation and hit the wall. The rest as they say is history. Kevin Motter takes home another First Place win! Manny had to be happy with his solid 2nd Place spot on the podium.

Congratulations to Kevin Motter (RawFew) for bringing home the win once again, as well as Top Qualifier for this month! To Manny Campalans for bringing home 2nd Place with some impressive runs, and last but not least, Mikko Yang for taking home 3rd Place! Definitely not an easy task when you have a house full of skills like we had this past weekend! These guys were on their game and deserved their spots on the podium!