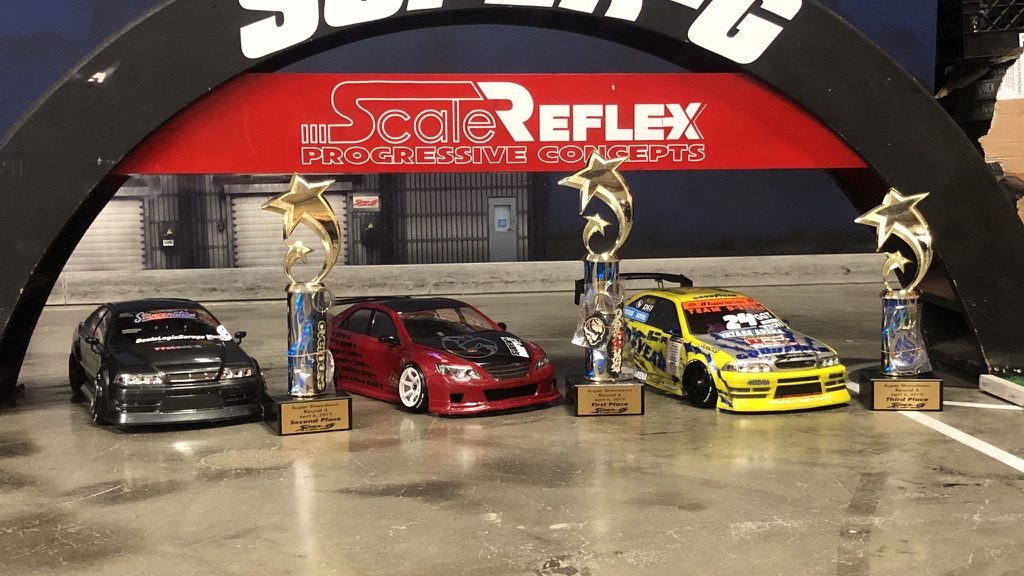 This was a weekend of change and surprises. This was the first SuperShowdown on the new Super-G layout. We have a few Fun Comps under our belt to ensure the flow is right and the clips work, but this was the real test. To add to the change of a new layout, we also officially launched our new spec tire, DS Racing – RWD FFFF Zero Mark II all around. Each competitor received a full set (4) of our new spec.

The weather was awesome this time around. We hope that is the last of the rainy comps for awhile. It was very comfortable and we were able to use the pit spaces out back.

Since it was Formula D weekend, we were lucky enough to have Jeremy Meyer and Michael Markentin from Driftwell R/C Drift Arena visting. It’s always a great time with they visit, not to mention the unique creations Jeremy always has to show. I was really impressed with his body that he engraved on the inside. It had a crazy 3D effect and looked like nothing I have ever seen. You have to see it in person to fully appreciate this man’s work.

The spec tire for the event was DS Racing – RWD FFFF Zero Mark II all around. A full set of tires were supplied with every entry.

Qualifying:
It was an interesting qualifying session this time around. Since we were on new tires, (Less sideways traction and forward bite) we weren’t sure what to expect. When I said it was a weekend of surprises, it really was. One of our O.G. RawFew Team Members and one of the guys who started the whole R/C Drift thing here at Super-G, even before there was a Super-G, Jason Fordyce, made his return after a 1.5 year break. In total, he had less than 1 hour of practice total, and he managed to earn himself TQ of the event! He won himself an Overdose Keychain donated by Overdose for this months SuperShowdown! Not so fast though! This was the first time we needed a tie breaker for TQ. Manny Campalans and Jason had both put down some amazing runs, so we needed to go to a tie breaker. Jason took it by a slim margin, but a win is a win!

Tsuiso Battles:
The Tsuiso battles is where all the real action happens. This is what it is all about, head to head competition. The best of what SoCal has to offer come together here at Super-G to show was they have. This round was no exception.

This weekend the battles seemed to be even more exciting than usual, with the proximity of the cars being closer than it’s ever been, not to mention a lot smoother. The finals all came down to Alan Benites vs. Mikko Yang for 3rd and 4th place, and Jason Fordyce vs. Manny Campalans for 1st and 2nd place!

First up was Mikko vs. Alan. Both of these guys are no strangers to the podium spots. In the end, Mikko was able to hold it together and grab that 3rd spot!

Then it was the grand finale! Jason vs. Manny for all the marbles! Both these guys were on fire all night, and in fact these two were your TQ and 2nd Qualifier. The first round these guys went at were as close to identical as you can get, both on the lead and the chase. This forced us to go for a One More Time (OMT). This time both were warmed up and ready! Both put down some amazing runs on the lead and chase, but Jason committed and went DEEEEEEEP in all the clips, forcing a slight miscalculation on Manny’s part causing him to bump a K-Rail hard enough to seal 2nd Place for him. This meant Jason took the Top Spot on the podium!

Congratulations to Jason for winning right off of a 1.5 year break. Manny grabbed a clean 2nd Place, and Mikko taking 3rd!

Special thanks to our judges of the night, Colin Chambers and Shaine Collins for judging along side of me. This one was an interesting one for sure!