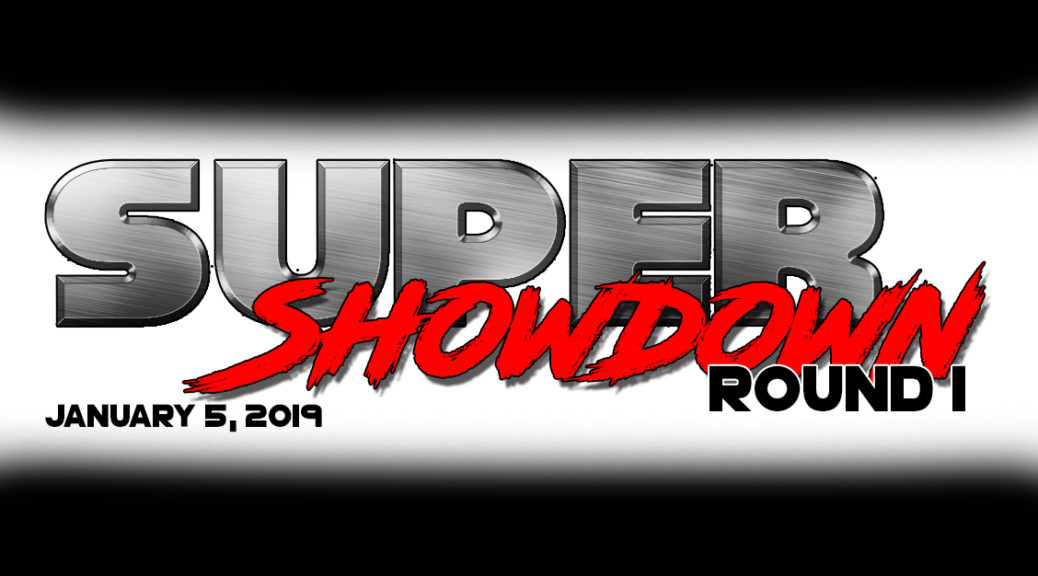 This past weekend was the kick off for the Super-G SuperShowdown point series. The SuperShowdowns are the Super-G Monthly Competitions which are open to anyone at any time during the season. 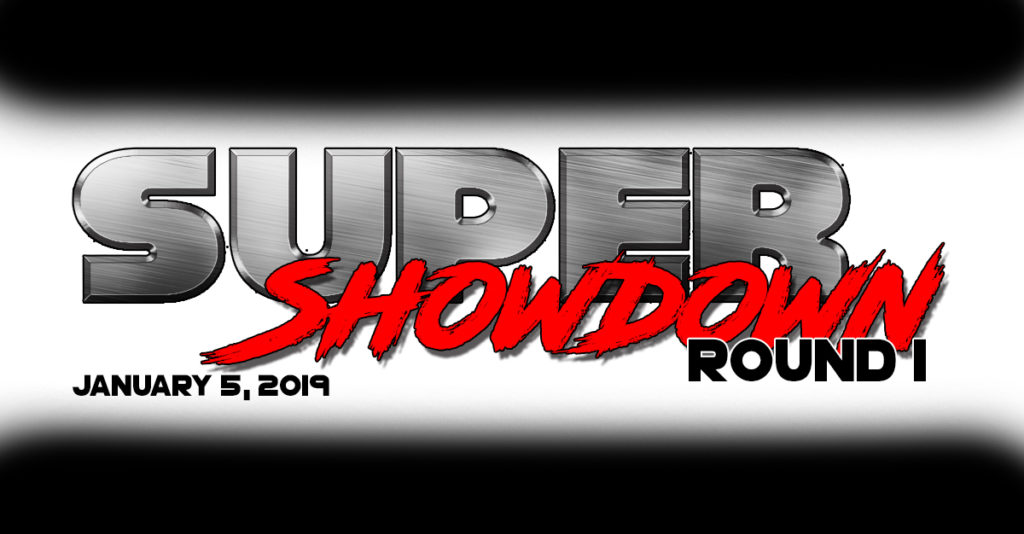 Don’t fear if you missed the first one. We (the official judges) have been ironing out the details, and we have decided since everyone has an off day, people get sick, and basically life happens, each competitor will have their 2 worst event scores dropped. What this means is, you can miss up to 2 events and still not be penalized. Beyond 2, and you are on your own.

We weren’t sure how the turn out was going to be for the first comp of the year, being as it was the same week as New Years, we expected the turn out to be small. It was on the smaller side, but still a decent amount considering the timing and the weather. (Cold and raining of course).

The spec tire for the event was Yokomo DRC all around. A pair of rear tires were supplied with every entry.

Qualifying:
The first order of business was qualifying. The line was changed and the clipping points were a surprise for everyone since we laid them out just before we opened. It proved to be challenging for even the best of the drivers since the clips have been all outclips for the past month or so. We added a couple nose clips to spice it up a bit.

Tsuiso Battles:
For some reason everyone brought their best driving out for this event, and as the night progressed, the driving just got better and better. 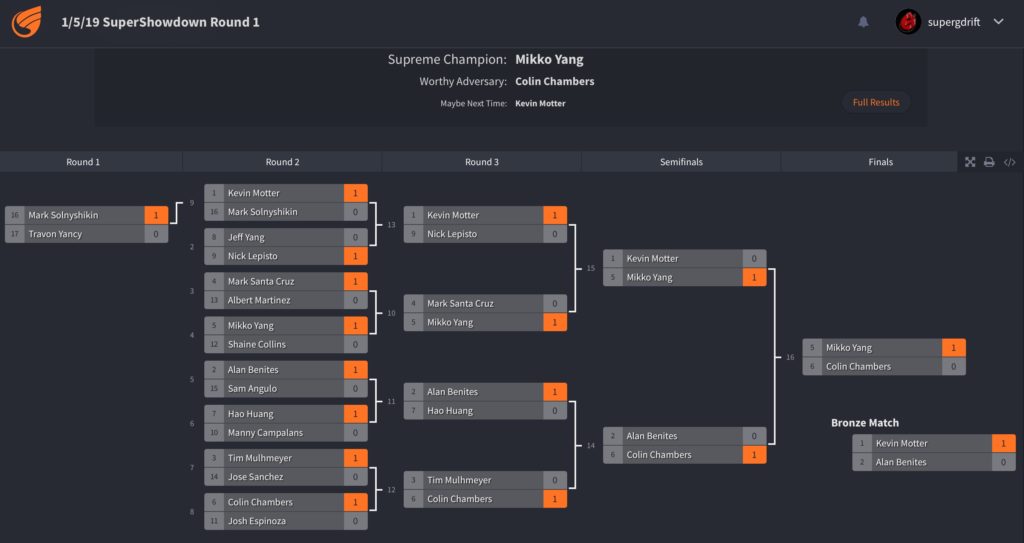 Some of the highlights of the evening:
Tim Mulhmeyer vs. Colin Chambers in Round 3. Tim is no stranger to the podium and is a seasoned competitor here at Super-G. Colin has been steadily moving up and has become a real threat. Tim was leading first. Tim was out there doing Tim, super clean and smooth, just as we have become accustomed to. Colin was hot on the chase and really applying the pressure to Tim. Then disaster struck for Tim and he spun at the second to the last turn. Next up was Colin on the lead, Tim chasing. Colin put down a very respectable lead with Tim on his door, but Tim’s chase wasn’t enough to overcome the spin on his lead. This allowed Colin to advance.

The battle everyone seemed to be waiting for was Kevin Motter vs Mikko Yang. This happened in the semifinals. These are the 2 most winningest drivers here in SoCal, so we knew it was going to good! First up was Kevin leading and Mikko chasing. Kevin is notorious for extremely deep lines and tons of angle. Into the first clip Kevin does his normal super deep entry, Mikko answers back with an equally deep chase and incredible proximity. This time matching Kevin’s crazy angle as well! Kevin lays down a near perfect lead, if not perfect, and Mikko’s chase was about as good as it can get! Perfect chase? Why not! There I said it! Now it’s Mikko’s turn to lead and Kevin is chasing. Out of the gate Mikko throws some serious speed. Surprisingly, Kevin is able to keep with Mikko through the first straight and is right on his tail heading into the sweeper! Mikko throws it hard into the first clip and appears to have caught Kevin off guard! This forces Kevin to duck to the inside to keep from making contact and he takes a shallow line through the sweeper. For the remainder of the course Mikko pulls out a near perfect run. I say near since there’s small things that can be picked on, but we can call it perfect. Kevin’s chase was amazing, but the shallow line on the sweeper just wasn’t going to cut it. Mikko takes the decisive win! Both these guys put down what is probably some of the best driving we have seen here at Super-G!

The final battle for 1st and 2nd came down to Colin vs Mikko! Mikko was first to lead. Since this guy was on fire all night, it wasn’t surprising to see him pull off another amazing lead. Colin had some really really hot beef jerky just before his turn to drive, and he was still feeling the effects of it and the 2 tall cans of Arizona Ice Tea. We aren’t sure if it was the jerky or the tea, but Colin pulled off an great  chase! Then it was Colin on the lead and Mikko on the chase. Colin pulled off a really clean lead and Mikko put down another amazing chase! Mikko’s proximity proved to be tighter than Colin’s. This was enough to lock down the top spot on the podium for Mikko, giving Colin a very respectable 2nd! Kevin Motter brought up the end of the podium with a 3rd place finish! Unofficially, (due to the unofficial fun comps at the end of 2018) Mikko has taken 3 CONSECUTIVE WINS here at Super-G! That’s no easy feat! 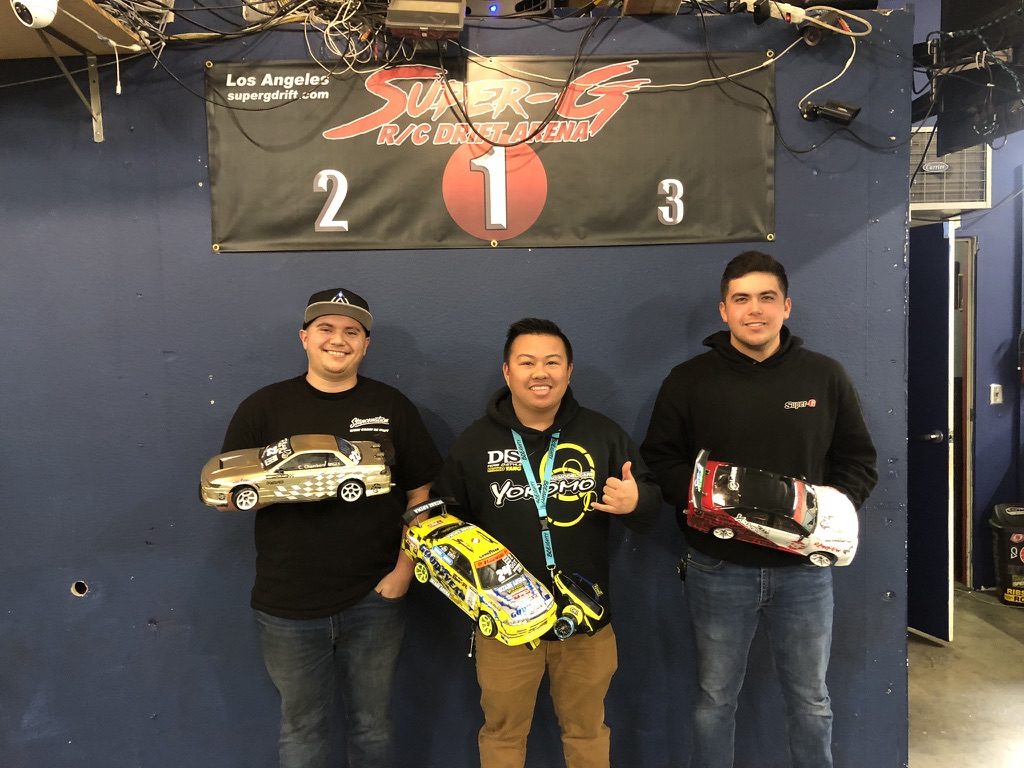 Congratulations to our winners, Mikko Yang, Colin Chambers, and Kevin Motter! Also a very special thank you to our Official Judges, Shaine Collins and Colin Chambers. Without you guys this would not be possible.

The official results can be seen here: 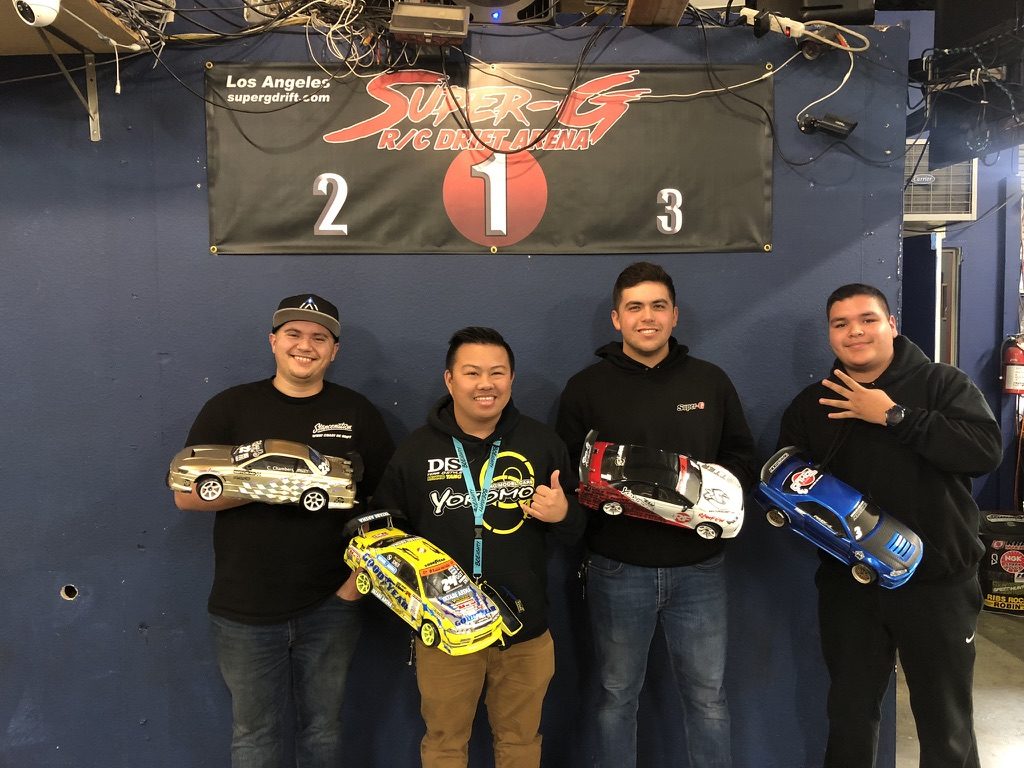